On Day 1 members of the group set off at various times and from various places but we all arrived safely at Frampton Marsh in Lincolnshire, an RSPB reserve that promised lots of birds which is exactly what we got. The most notable were the Golden Plover in huge flocks giving us an aerial view which could be likened to a Starling murmuration, glinting gold in the cold winter sun.  There were also plenty of Dark-bellied Brent Geese about. 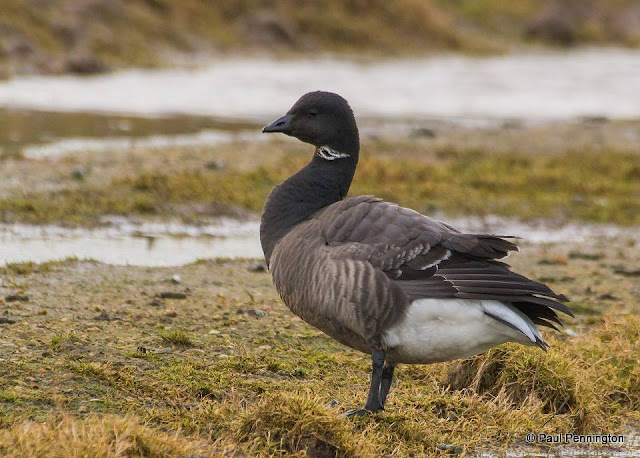 Out on the saltmarsh there was a Merlin, Marsh Harrier, Little Egrets and several Brent Geese flocks often flying past. We spent a few hours here and saw some good birds including Ruff, Wigeon, Pintail, Gadwall, Lapwing, Skylarks, Curlew and Shoveler - sadly the long-staying Long-billed Dowitcher evaded us but not from lack of trying on our part. 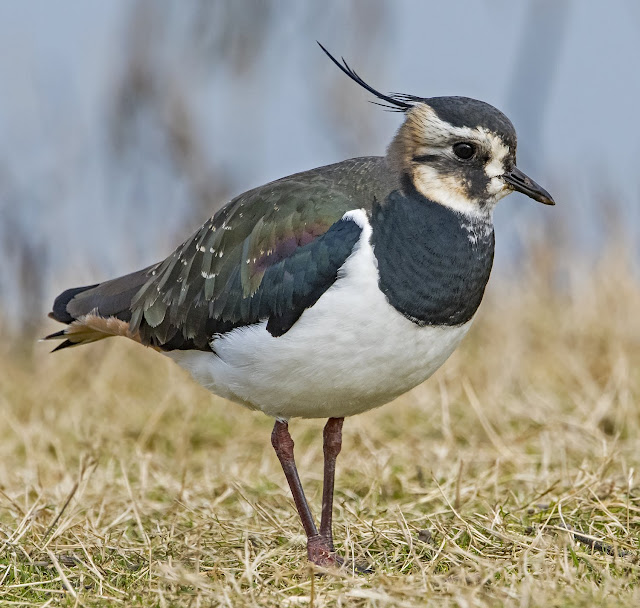 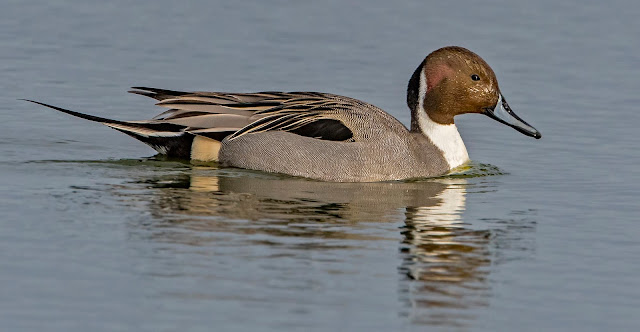 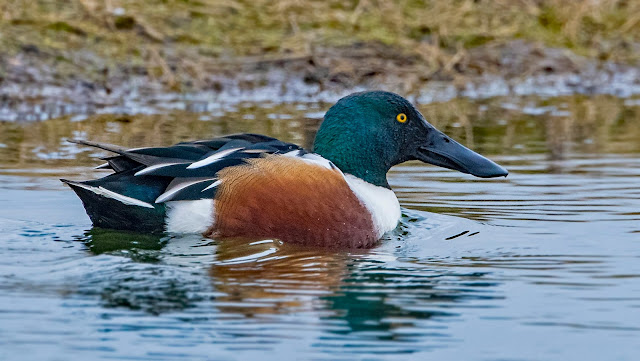 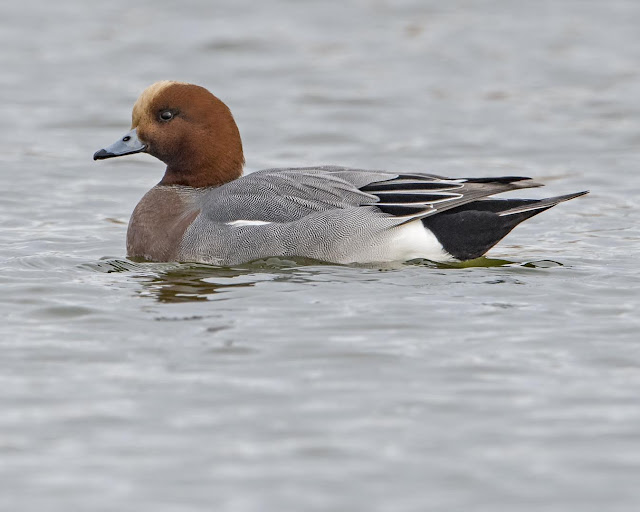 From Frampton Marsh we set off for Cromer, our destination and hotel for the next four days, birding as we went. The hotel was warm, comfortable and an excellent meal was enjoyed.  Cromer is a good base from which to do daily birding trips in Norfolk.

Day 2 saw us heading for Barton Broad one of the group's staple sites where a Great Crested Grebe swam unusually close in front of us on the viewing platform, obviously a people-watching Grebe! As it is part of the Norfolk Broads system boats sail through but they keep to their part of the waterway so the water birds such as Goldeneye, Teal, Tufted Ducks and Greylag Geese could be left as undisturbed as possible.

A Kingfisher was seen flashing through the broad by some lucky members, a blur of turquoise over the still grey water and a Water Rail was first heard and then seen skulking in the reedbed behind the platform. There were also lots of small birds in the woodland areas including various Tits and a Great Spotted Woodpecker.

We then went on to Winterton-on-Sea for a seawatch with plenty of Gulls, Cormorants and Scoters. Here a Firecrest had been reported in the sand-dunes, but one look at the vastness of these dunes and it quickly became obvious we would need the army to comb them for such a small bird. However, it didn’t stop some of us from looking and constantly listening for this elusive bird.  And all wasn’t silent as the Skylarks sang their hearts out - what a wonderful song to hear in the quiet and peacefulness of that vast ecosystem. Occasionally small flocks of waders would fly past, inlcuding Reshank and Sanderling.

Sadly the coastline has suffered there in the recent storms, the edge of the cliff being cordoned off as unsafe due to erosion and huge stretches of golden sand were visible which hadn’t been seen before by us. Some of the boat huts looked to be in danger of disappearing should there continue to be such storms and erosion. Out to sea Red-throated Divers were present in good numbers, and a Red-necked Grebe also gave some of us a good view now and then as it bobbed up and down on the swell. 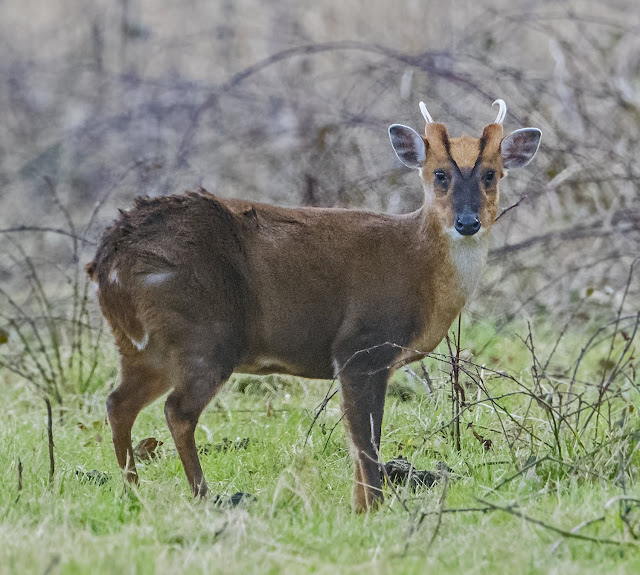 From Winterton we set off for Hickling Broad and enjoyed a good cruise around the area as we headed to Stubbs Mill for the Harrier roost. The weather was lovely for February, blue skies and a bright, clear atmosphere which aided in our views of the old windmill which are for pumping water, their blades now redundant as the machinery is operated by either diesel or electricity. But they still stand sentinel over the dykes and fields. 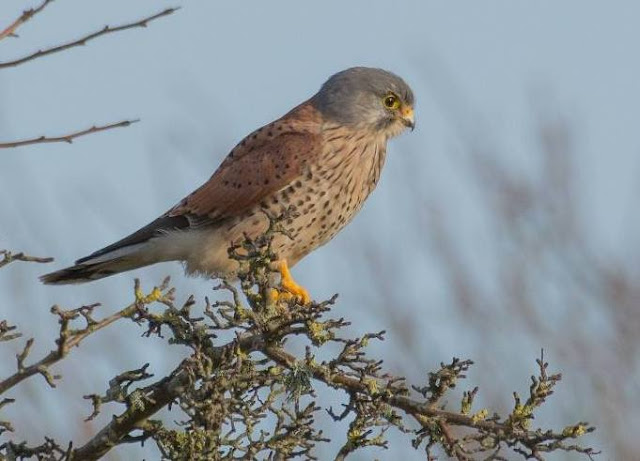 After having a great view of a Muntjac Deer at the start of the path, we had a nice walk around and settled down at the Stubbs Mill raptor viewpoint to wait for dusk. Kestrels dropped in, a Jay flew across calling loudly, and the Marsh Harriers arrived distantly in good numbers to settle down for the night. To our disappointment, a huge mechanical digger was working on the ditches but as it did it disturbed a Great White Egret which then flew past and gave a wonderful show for the spectators. So it wasn't a bad thing in the end. 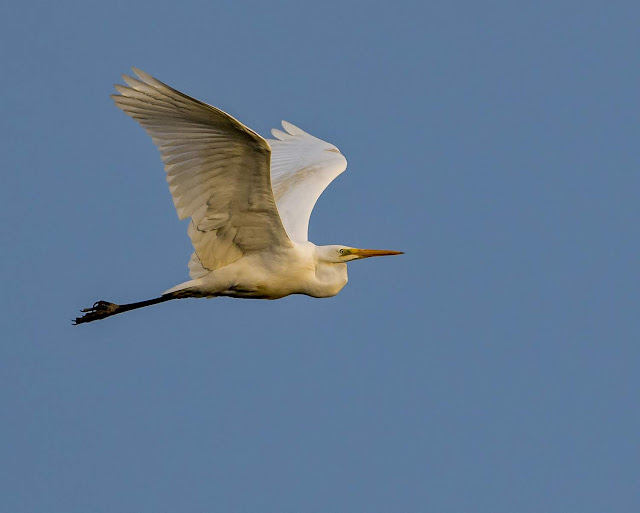 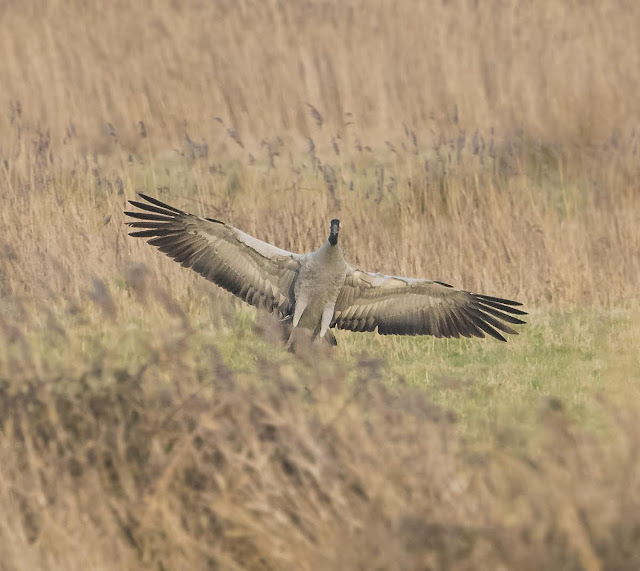 There were two distant Common Cranes on the ground which occasionally put their heads up giving us good scope views before they flew towards us being disturbed by the digger which had moved and was working further away.

A little while later a family group of four Cranes (two adults and two juveniles) flew past in a line and a further two were heard calling and then flying as we walked back to the car. We had hoped for a Barn Owl but none appeared and so as it grew dark we headed back to the hotel to review our list for the day and settle down for the evening.  But just before we left, the bushes behind us became alive with two or three tiny Goldcrests which flitted around in the dark. 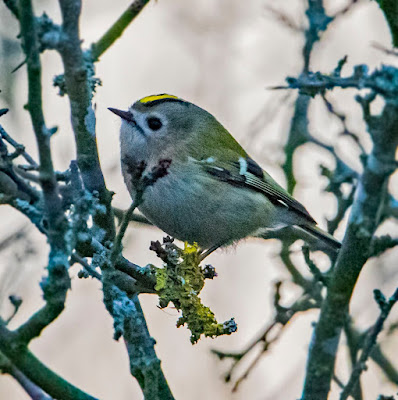 Day 3 started at Salthouse with Ringed Plover, Turnstones on the shingle beach and a flock of Curlew and Black-tailed Godwits further inland. 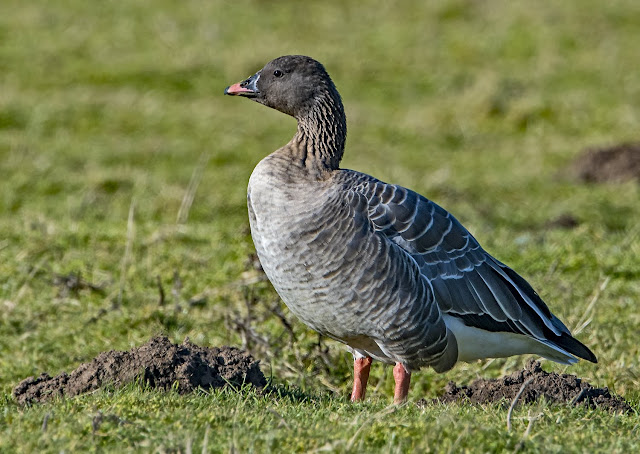 From there we went to Holkham Gap for the Pink-footed Geese, Snow Buntings, Shore Larks and, as a bonus, a Dartford Warbler which had us searching the scrub of brambles and Sea Buckthorn, where we had several views of it as it perched albeit briefly on the vegetation before dropping down again to find food. There were also Stonechats and Chaffinches present to confuse the issue. 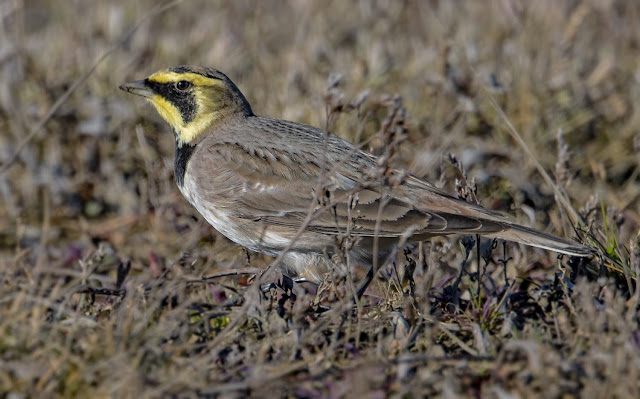 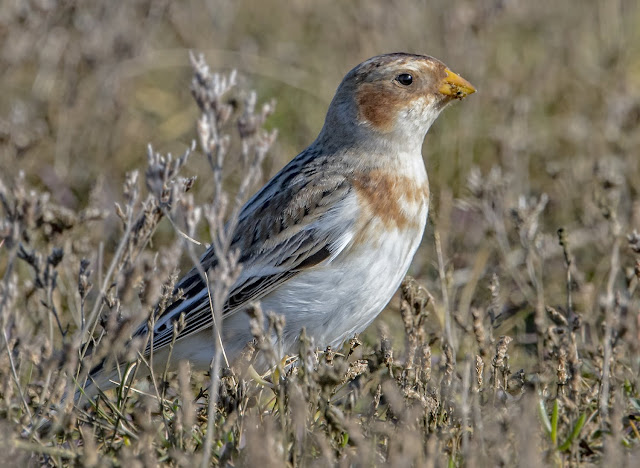 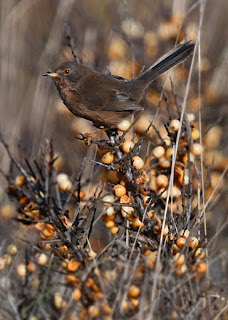 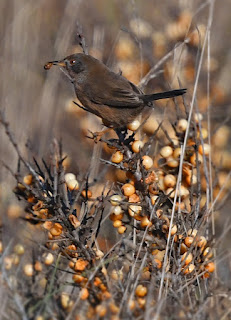 Then on to Choseley Barns for Yellowhammer, and the spot of the day, a Barn Owl quartering a field at the side of us, where most of the group got some brilliant sightings and wonderful photos of this bird. There were also Red-legged Partridges in the field and two Red Kites - what a place to stop! 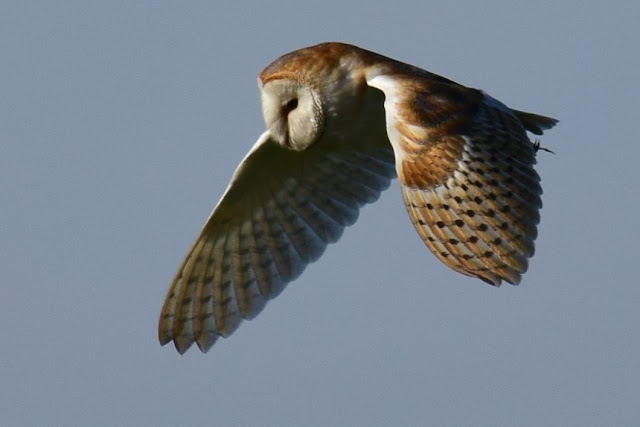 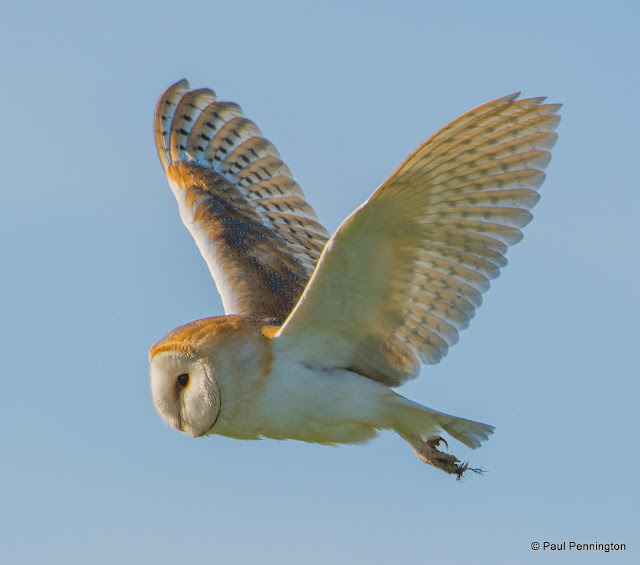 After enjoying this bird for half an hour, and enjoying our chat with the group and other birders who were also enthralled with the closeness of the Barn Owl, we headed off to Titchwell RSPB, here we had both Black-tailed and Bar-tailed Godwits, Grey Plover, Sanderling and Spotted Redshank close up, more Barn Owls, can you ever be fed up of watching Barn Owls – I think not! 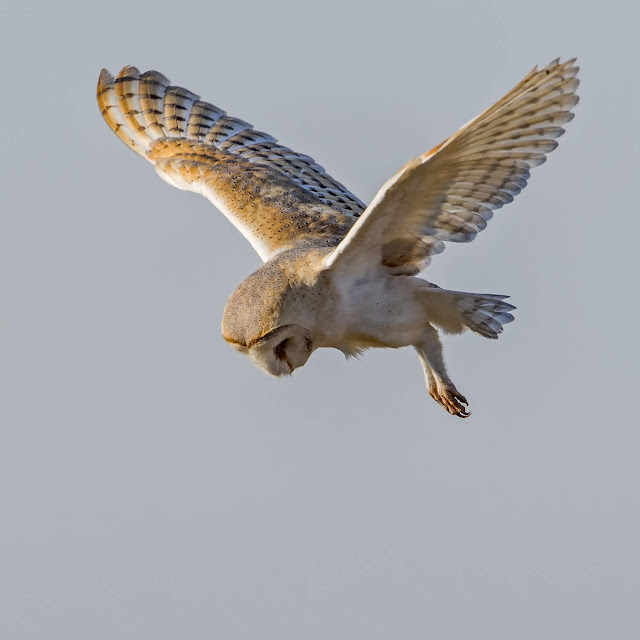 Waders and small birds aplenty and the sound of the Skylark filling the air with its wonderful song. Geese flew over and sailed on the ponds, Dark-bellied Brent Geese, Pink-footed and Greylag as well as Canada Geese. Another bonus was a group of six Red Crested Pochards in amongst the 'normal' Pochards. And as the sun went down in a fabulous sunset, the Marsh Harriers arrived at their reedbed roost in numbers - one person counted over twelve of them.  There was also a small but interesting Starling murmuration with some superb shapes being thrown. What a great end to a wonderful day. 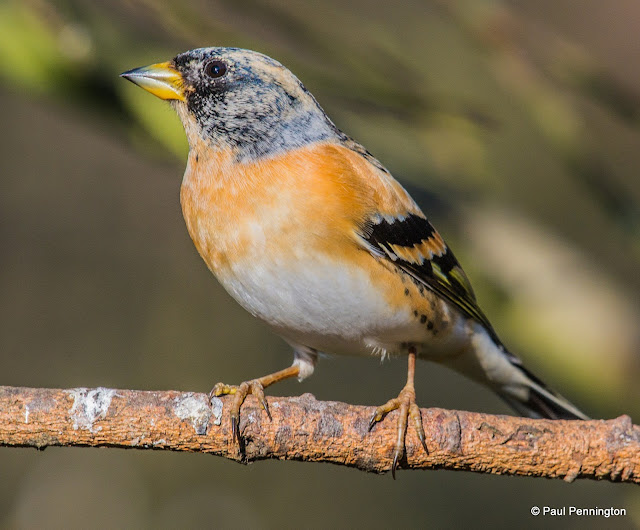 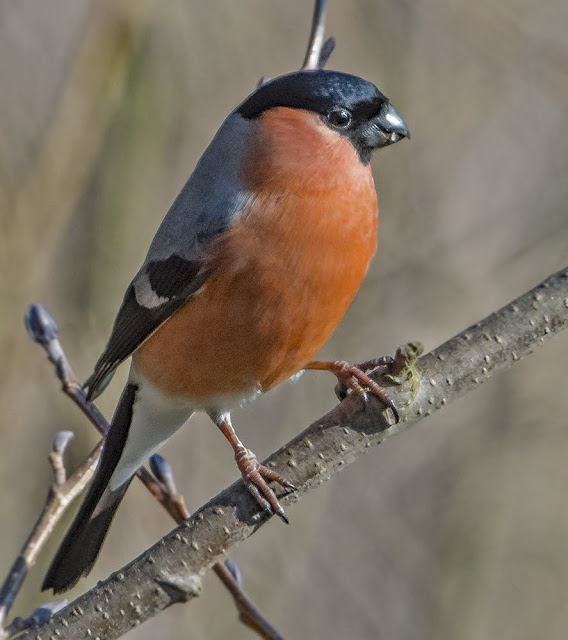 Day 4 was the day to travel home and here we were given the choice of where to visit as we made our way back. Part of the group went to Thornham on the coast for Twite and was not disappointed, and some went to a newish reserve called Sculthorpe Moor Nature Reserve run by the Hawk and Owl Trust. Again we were not disappointed as it is a superb little place and definitely worth a visit. Some of the group even saw Otters here! 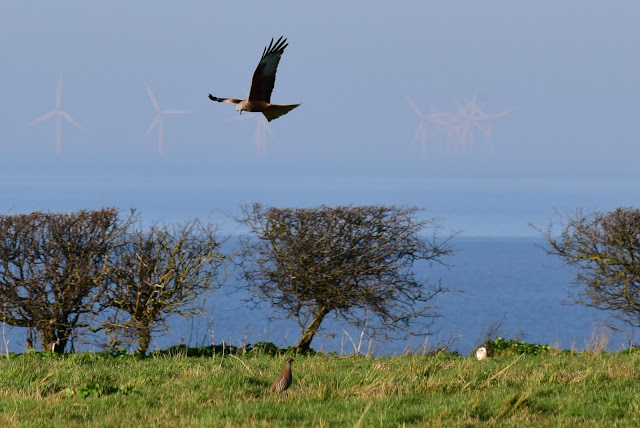 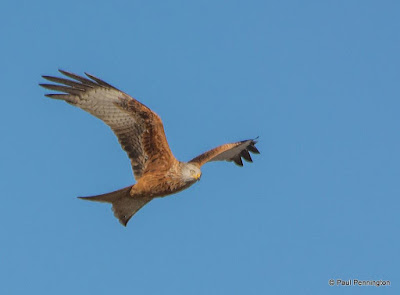 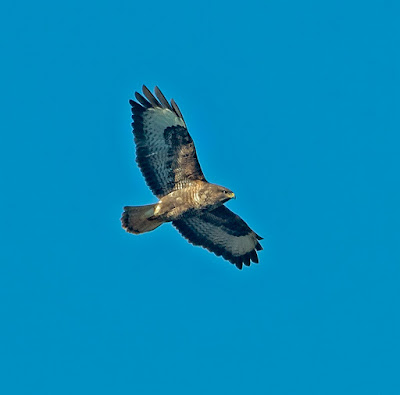 The reedbeds stretch for miles and strangely Bittern isn’t reported there, maybe one day soon it will. Brambling, Reed Buntings and Bullfinches were up close on the feeders, Buzzards were overhead and Red Kites were calling across the meadows and reedbeds. 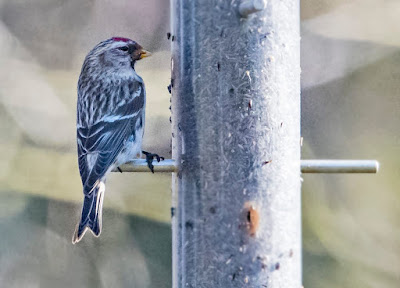 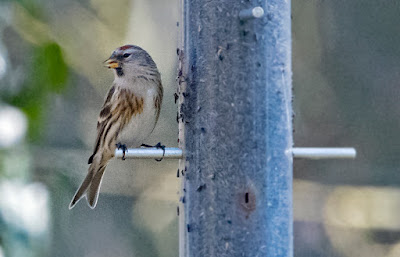 A different bird flew over and after great discussion, it was decided it was probably a Goshawk - a later discussion with one of the rangers confirmed they pass over the reserve and noted our record of it in his book. Lesser and Common Redpoll fed on the same feeder in the woods where we could compare them to see the differences. 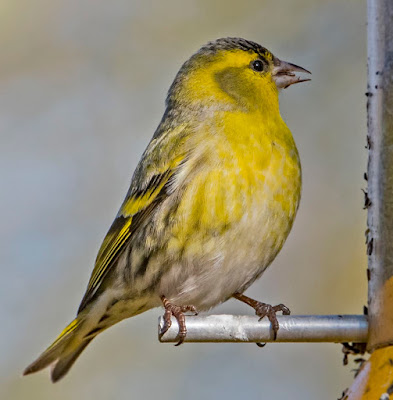 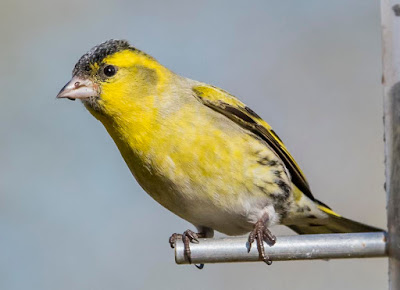 Siskin, Marsh Tit and Treecreeper were also seen and heard, Reed Buntings were there in good numbers and last but not least, Collared Dove looking so clean and bright in the clean air that they deserve a mention. 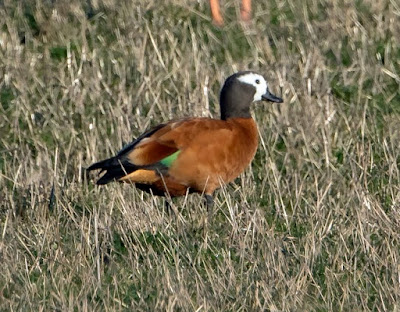 Some went to Flitcham Abbey and saw a Little Owl whereas others went to Snettisham RSPB where the wader roost over the high tide proved to be very underwhelming. However, there were a few oddities present including a Cape Shelduck (probably an escapee) and some odd hybrid Greylag Geese. Over the four days of the trip, 117 species were recorded - a good count aided by the great weather. 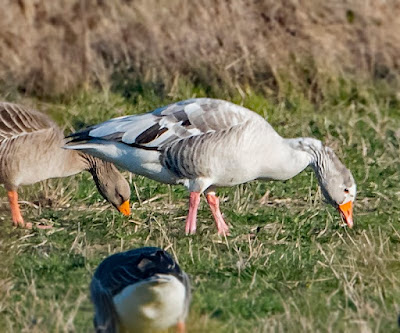 Thanks to Eddie King for organising the trip and to all who attended for your wonderful company on another great L.O.S. winter trip. Here's to the next one! 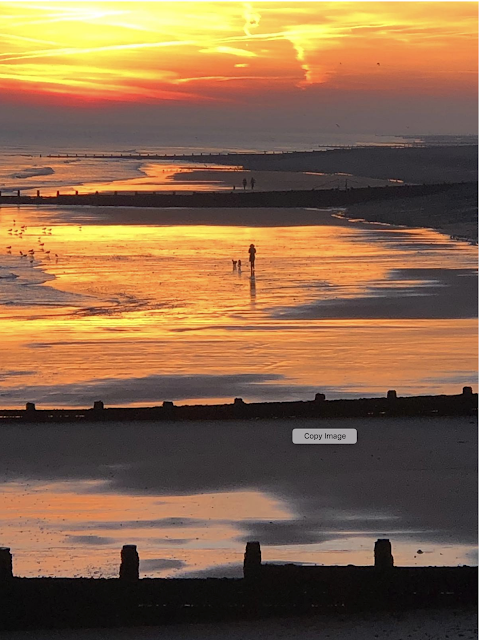 Report by Joan Disley (with additions by Martyn Jones)