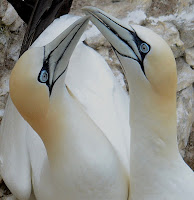 The much awaited LOS trip to Bempton Cliffs took place today. We didn’t see much sunshine and there was a cold wind blowing from the sea and together with the updraft from the cliffs, these factors made it difficult to hold your binoculars or cameras steady for long. But at least it didn't rain for us.

However, if you could keep your mind off being so cold, what a place! For anyone that hasn't been to this seabird reserve, there are spectacular sheer drop chalk sea cliffs over 400 feet high. In one small part lower down, a natural arch has been formed sticking out into the sea where the rock has fallen away underneath.

On top of this area were dozens of evenly spaced Gannet nests and as the breeding colony has grown there are now also lots of Gannets nesting on the side of the taller cliffs in places you wouldn’t think possible.

Add to this the constant sound from the Gannets and Kittiwakes plus the smells, and it certainly makes it a special place. 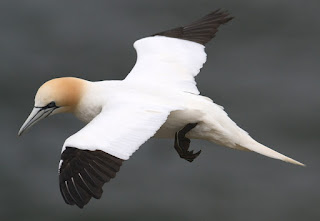 For most of our time here there was a constant fly past of mainly adult Gannets, one of the most numerous birds to be seen, but occasionally a younger bird flew past which showed various amounts of darker feathers.

Sometimes a bird would be carrying seaweed for nesting material and it was surprising how many nests contained pieces of brighter coloured rope that I can only think has been left in the sea by the fishing industry.

The other two most numerous birds were the chocolate brown Guillemots and Kittiwakes which together with the darker Razorbills made up most of the remainder of the constant movement of birds between the sea and the cliffs. 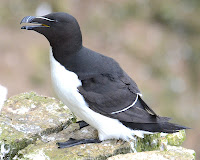 Along the cliff face, the horizontal ledges were full of long lines of Guillemots, with smaller groups of the darker looking Razorbills with Kittiwakes sitting on their precariously placed nests.

It's amazing how many birds can be packed for breeding along these narrow-ledged cliffs with the wind blowing relentlessly against the sheer cliff faces - but breed they do and usually very successfully. 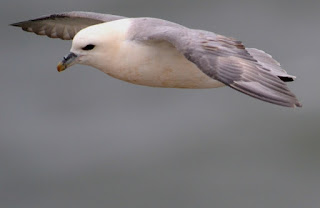 In the mix of all these moving birds the straighter winged flight of a tube-nosed Fulmar could occasionally be picked out, although there weren’t as many of these to see as there have been in other years.

A single Fulmar was also seen nesting in a crack above a ledge on the cliffs.

In a few places Herring Gulls were sitting on their nests and we managed to see most people’s favourite the Puffin although only in single numbers with the odd bird seen perched on a cliff ledge.

The cliff tops were covered with Red Campion in flower making swathes of bright deep pink colour wherever you looked, and when we were near the nesting arch of the Gannets, Joan Spotted a Grey Seal in the sea way down below us.

Away from the cliff tops various other smaller birds were seen in the fields and hedges. The area around the visitors centre was good for Tree Sparrows and we also saw House Sparrow. 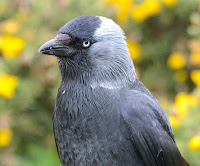 Cheeky Jackdaws were coming to the picnic benches possibly for a free meal and we had Whitethroat, Yellowhammer, Goldfinch, Greenfinch, Chaffinch, Reed Bunting whilst a Skylark or two were heard singing overhead.

Flying around over the fields were House Martins and Swallows and all to soon it was time to leave for the long journey back home.

For a few of us, however, our day hadn’t quite finished with the wonderful things in nature there are to see when not long into our journey home a Roe Deer ran out from some hedges by the side of the road, ran in front of the traffic and across the road. Fortunately none of the cars hit it and the deer jumped through a gap in the opposite hedge and went safely away into the fields.

What a way to finish another good LOS trip.
Thanks to Al for the trip and to Eric for a safe journey there and back.