KEEP YOUR EYES TO THE SKIES AND PRAY

For our fourth trip of the L.O.S. season we met at Doctors Nook at 8.00am on a wet miserable morning. Fingers crossed, we headed off to Ainsdale hoping the window of dry weather promised to us was going to enable us to get some birding in. 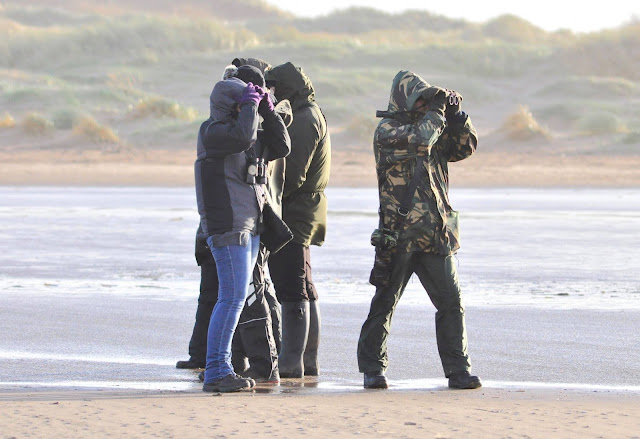 On arrival at Ainsdale Discovery Centre at 9.00am we teamed up with three members that had travelled direct this made six in total, with the promise of 3 others to join us at around 11.00am. We had a short discussion about the weather. We quickly agreed that we had only about 3/4 hours and that Lunt Meadows would probably be a bad idea as the afternoon forecast was one of persistent heavy rain. Not good conditions for any Short-eared Owls or other birds for that matter. Also no shelter to escape any downpours and just the prospect of a good dousing. 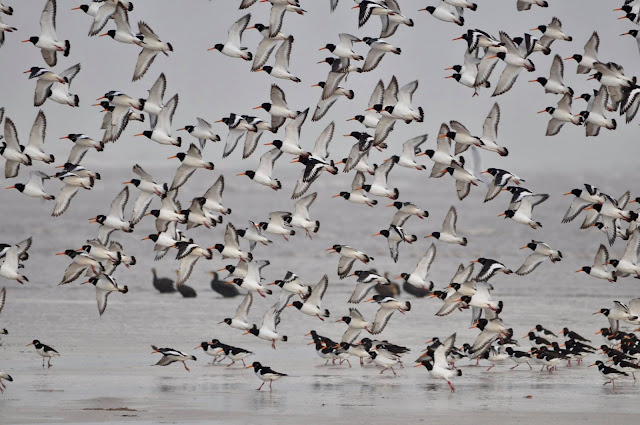 So after deciding to abandon Lunt we headed out. Firstly to Ainsdale and Birkdale Sandhills Lake. (try saying that after a few drinks) This would give us some shelter from the strong westerly wind and we thought worth a mooch.

The lake produced a stunning male Goosander along with a host of Mallard and Tufted Duck and also Goldfinch, Great Tit, Blue Tit and a few more of our more common birds. Then onwards to Ainsdale Beach via the sand dunes. On reaching the beach the tide was being pushed along by the strong westerly wind. High tide was only 90 minutes or so away, so a good time to arrive. 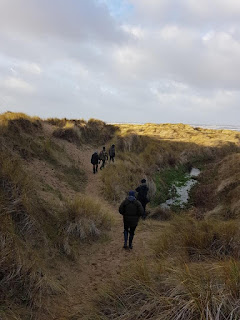 Along the tide line some 100 yards in front of us we spotted our first Sanderling. To the naked eye they looked like little balls of polystyrene being pushed onto the beach by breaking waves. Then every birdwatchers nightmare, kite surfers setting up, dog walkers along the tide line coming in our direction and two women walking ten dogs between them.

They forced the hundred or so Sanderling into flight and off northwards into the distance. Then they released all ten dogs right in front of us. Time to redirect our plans.

We decided to head towards the sand dunes away from the tide and walk north bound up the beach and beyond the ten frolicking dogs. 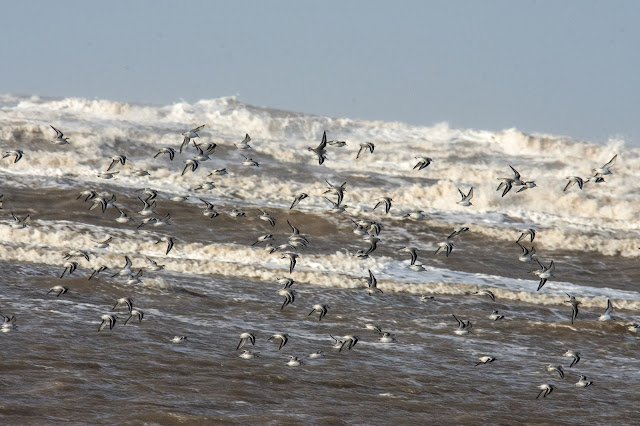 Walking north bound hugging the dunes, we saw a small flock of Linnet some fifteen or so in number. But in the distance along the ever rising tide were birds, a lot of birds. Being battered by the strong wind we continued northwards hoping for good views.  We decided to cut into the dunes and use them as a screen between us and what we could now see very clearly where thousands of waders mixed with Gulls and Cormorants. We were now some two miles further up the beach. 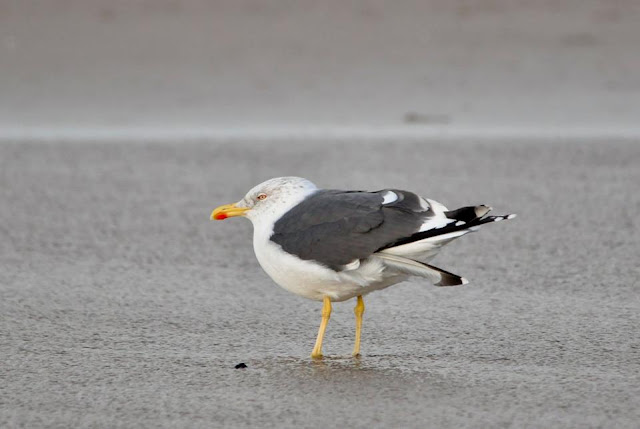 After another few hundred yards done with military precision, we literally crawled and scurried like commandos to the top of a small dune by the beach armed with cameras and binoculars for what proved to be a sight worth beholding. 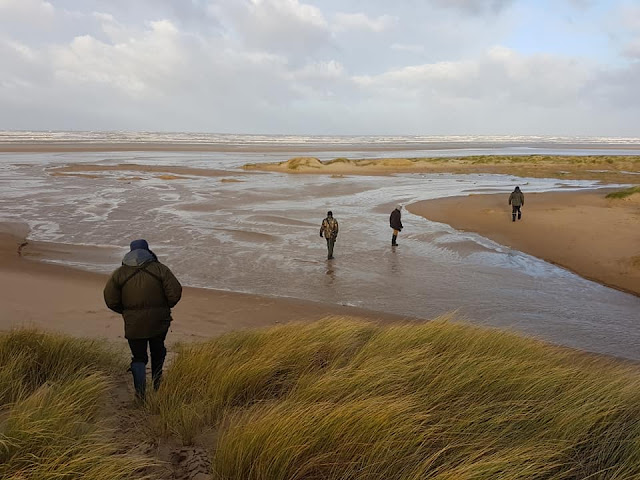 Thousands of Oystercatchers stood like statues some thirty or so yards in front of us. Similar numbers of Dunlin and Sanderling constantly being disturbed by the still incoming tide. Flocks of some sixty plus Knot made short sorties along the tideline. We were in bird heaven, no dog walkers and all the kite surfers had exhausted themselves and long since given up. 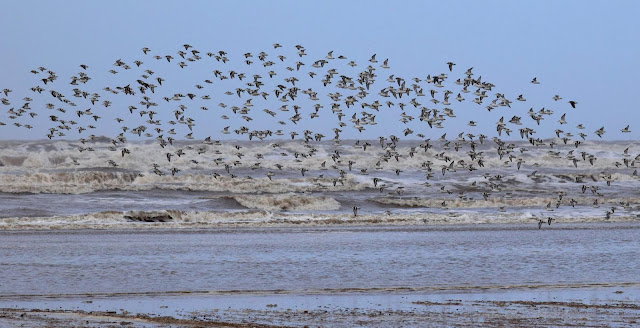 Looking further up the beach northwards in the distance were thousands of waders rising briefly from the tideline into the air like plumes of smoke. Tempting as it was to investigate the rain was closing in fast over the sea in front of us, a looming darkness, not something to get caught in. 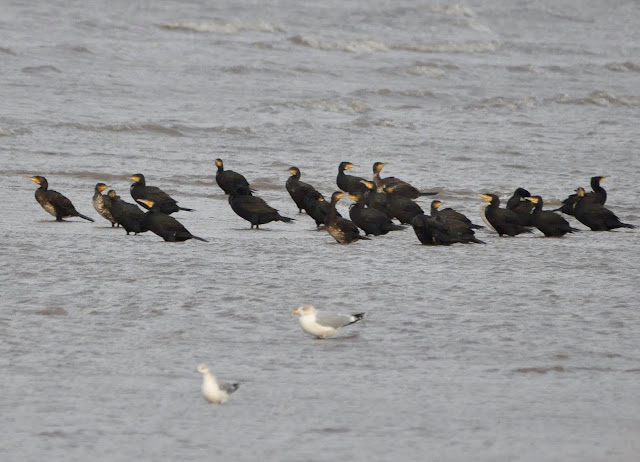 With the heavy rain almost upon us we made the return journey within the shelter of the dunes. A solitary Kestrel hunting, the odd Meadow Pipit rose from the tussocks of grass. Jeff Hurst helped us identify some of the plant life along the way. 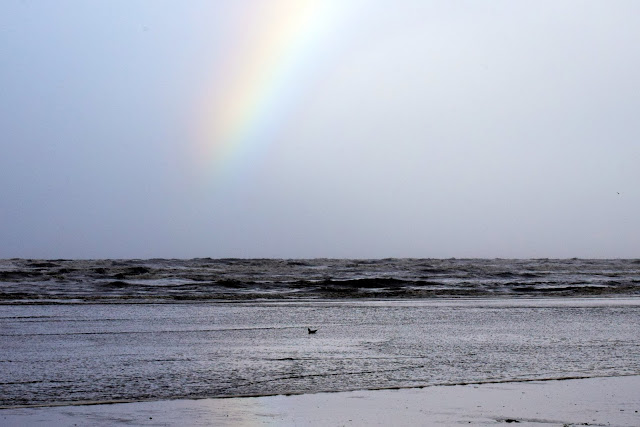 Eventually we reached the vehicles and spent ten minutes chatting about our day, with a sandwich, and a welcome brew from our flasks. With Lunt abandoned and only 24 species under our belts we wound our merry way home. All the cobwebs blown from between our ears, dry and exercised, and ready for the next adventure. Considering the conditions, a great day, in great company. Although we were a little thin on the ground.

Hope to see you all in the New Year. Have a very Merry Christmas.
Paul Pennington
L.O.S. Fieltrips Officer
3 comments:

Members and friends of the Society enjoyed the annual get together at Leigh Rugby Union Club last night, in particular, the wonderful slide presentation by Martyn Jones.

Martyn’s show title was “Adventures in a Birdmobile” he described the idea as a way to get close to birds using the vehicle as both accommodation and a hide, the show incorporated several key birding sites around England and including Dumfries and Galloway in Scotland.

Martyn is a first-rate photographer and put together an educational, informative and sometimes amusing evening’s entertainment, well produced and enhanced with birdsong and musical themes.

My thanks, to all who were involved in the evening, quiz suppliers, raffle organisers, prize givers and of course the audience, a special thank you to our presenters Fairy Nuff and 'Elf & Safety' (Anne Johnson, Brian Fawcett and Tony Bishop) not forgetting the caterer Amanda’s Pantry for providing delicious hot food.

The evening concluded with a monologue from Monica King “Joyce the Librarian” and a singalong of Christmas songs led by Eddie King.

On a sad note, Tony has informed us that after Brexit the elves and fairies who reside of course in the E.U. will not be allowed to perform on this side of the water, so next year’s visit is on hold.

A Merry Christmas and a prosperous Brexit, thanks to all for your valued support, David.
1 comment: