Just a quick reminder that this Friday (23rd November) is L.O.S. Members' Night from 7:30pm onwards at the Rugby Club in Leigh.  There will be a buffet at £4 per head payable on the night and a presentation of birding photographs will be given by L.O.S. Chairman David Shallcross.

If you haven't booked a place yet please get in touch with either David or Tony for ticket availability.

Would all those members who are attending please consider bringing a small prize for the raffle which contributes to the Society's funds.  A great night will be had by all.
1 comment: 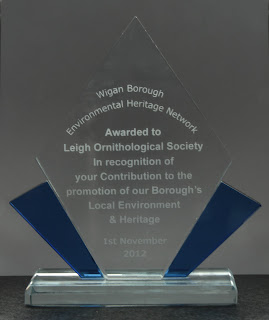 The Society has been recognised by Wigan Borough Environmental Heritage Network for its contribution to the promotion of the Borough’s local environment and heritage.

The award was received on behalf of the Society by Chairman David Shallcross and Vice Chairman Tony Bishop. The Society is represented at Network meetings by honorary member Dave Wilson, David and Tony.

At the event David and Tony gave a slide presentation showing how Pennington Country Park was formed by coal mining subsidence, and how it has developed over time to its present status.

Ornithology and Conservation in the Leigh District 1938-1956

LOS Conservation Officer Roy Rhodes has provided this link to the LeighLife website on which there is information by Tom Edmondson about the history of birding in the Leigh area from his perspective.

On the same website there is also a collection of photos and cuttings about the chequered history of Pennington Flash and the flooding which used to occur and that seems relevant too.  There is also a section on what was then called 'Astley Flash' east of the tip at Astley Green.

I've only scanned it at present, but I think I'll be printing it out as it looks a really interesting read to find out what the birding and habitat was like in the past. Here's the link again to make sure you don't miss it!

LOS Treasurer Raymond Meredith, who is a volunteer for the Lancashire Wildlife Trust, has forwarded this e-mail about the peat extraction at Chat Moss:

Fantastic news! We have just heard, after a very long fight, that the appeal to allow more peat extraction on Chat Moss has been refused! A huge well done to everyone involved in such a long and difficult campaign. Although this is just one site, we have high hopes for this to become a test case for the rest of the country and possibly beyond!

You can read the news story here:
http://www.lancswt.org.uk/news/293/15/Wildlife-Trust-joy-over-peat-extraction-ban

This is great news for all who signed the e-petition.
No comments:

Tonight's LOS presentation in the Derby Room at Leigh Library was given by John Barlow and was entitled 'Birds of the Wayoh, Turton and Edgworth Reservoirs'.  John had come in at very short notice to replace the original speaker and we are very grateful that he made it as apparently he was nearly struck by lighting earlier in the day.  We're so glad he wasn't for all our sakes!

John has been a birder since he was eight years old and as he is now in his 40's, he has amassed a great wealth of experience in the field.  Indeed in this area alone he and fellow local bird photographer Clifford Heyes have recorded no less than 132 species from 1980 until today.

When he was young, John used to draw the birds he saw, and he eventually progressed to taking photographs on a Polaroid camera which was found to be very unsatisfactory, but it was the best he could do at the time.

John only bought his first digital DSLR camera in 2010 and so he is very reluctant to call himself a bird photographer yet. However the sheer quality of his photographs belies this and we think he does himself a great disservice.

The talk was a good mixture of information, humour and stunning photographs and the time passed very quickly indeed.  John showed us photos of the two main types of hide that he uses to get close to his subjects one of which features bullet-proof camouflage material - he's obviously taking no chances!

He also told us a funny story about the time a Whinchat kept perching on his head whilst he was wearing a camouflaged drape and so he couldn't actually get a photograph of it!

John clearly spends a long time setting up his shoots and will often visit a site many times to get a good photograph. He is very lucky to live close the reservoirs in the Wayoh area, and so he's able to get out there fairly often.

One of John's interests is shooting birds with man-made objects (often rubbish or other discarded items) or in human environments.

This is something that many photographers would try their best not to do, but John manages to get some quirky images in doing so and it is rapidly becoming one of his 'hallmark' styles.

Here's a humorous photo of a Little Owl on an electricity pylon - he clearly can't read!

The photographs featured here are all from John's website John Barlow Photography where all the images shown at tonight's presentation can be seen again. In addition, greetings cards and charity calendars featuring his photographs can be previewed and bought.

The presentation was finished off with a traditional sunset image: a fantastic photo of Darwen Tower.

A great presentation by a nice chap with stunning photographs - what more could you want for an evening out?

Please feel free to leave a comment about this post by clicking on the word Comment below this line and following the instructions which appear.
4 comments: