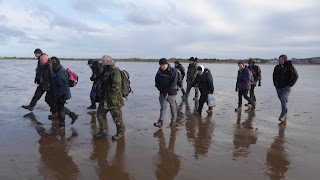 Society safely shepherded shore-shore solely scintillatingly steadfastly by our surefooted shore-man ‘Young Kenny’, our lone Hilbre guide for the day who happily welcomed Team LOS to his spiritual home…this gemlike plot of tranquillity and episodic isolation to which Kenny often safely and skilfully negotiates those of us landlubbers such as on this particular visit who admittedly are governed by the inland tides offered by such as Pennington Flash and the Ship Canal! 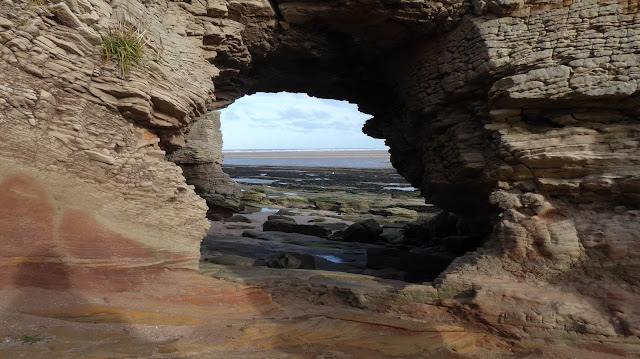 The launch time of our first footfalls was set at 10am sharp but the responsibility of ensuring that wet feet were avoided as ever weighed heavily on Kenny’s shoulders, especially as his right hand men were unable to turn out today and as much as his Mancunian H&S obsessed sidekick for the day made his role slightly easier, the full responsibility hovering about Kenny’s head put him into Shepherd mode....and within a few minutes the comfy corral in Morrison’s breakfast bar was emptied and all were inducted into the ways of safely negotiating our route to splendid isolation.... 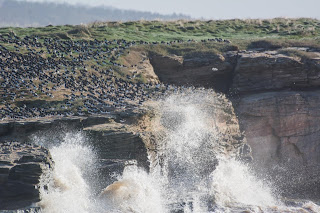 The weatherman had done his best to paint the day with a virulent colour of fearful conditions but in reality the northern blow that accompanied this crossing carried with it blue skies dominated by the sun....step by step over admittedly a ruffled carpet of sand (caused by as Kenny explained ‘wind over sea condition’) we absorbed energising life....arrived at and crossed over Middle Eye with ease and with careful steps moved over the rocky way that led us to our temporary Desert Island home. 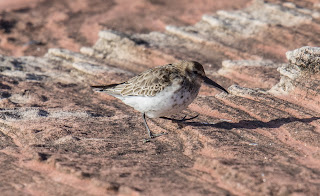 Observatory reached, most of the Team settled to elevenses whilst others set up their cameras ready to capture the images that a lively sea whipped up by the persistent northerly blow...a truly refreshing sprite that didn’t bite too deep to lessen our love of this late October visit to this often unpredictable isle which may not deliver birds in a big species spread but impresses with its bank of natural history that always gives impressive memories. 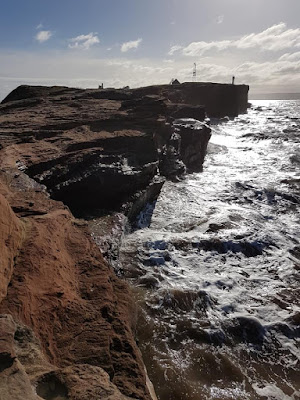 A wander over to the slipway at the northernmost tip of the isle was populated with images of a roaring seascape, elusive Grey Seals which played hide and seek in their wave rich habitat and Common Scoter which bobbed about on energetic white horses.

A vigil at the slipway which with ease refreshed the Team, as if all had committed to a week at an expensive Spa, gave few additions to the day list but all were made abundantly aware that the health of the surrounding sea as a larder was more than capable to feed a swarm of Cormorants and satisfy the ever present marauders of the sea, Great Black Backed Gulls.

A return through the private sections of the isle added a lone but vital mammal addition to our wildlife list and I’m sure that the Short Tailed Vole was happy to put a smile on the faces of our gathering before it retreated into the undergrowth.

Lunch, chat and lounging about in the relative comfort of the obs occupied the next hour. Kenny then put on his Hilbre Isle Historian/BTO bird ringer/Comedian hats after which, as with all street performers. passed round the Obs hat round. He must have been good for this was generously filled to the brim. 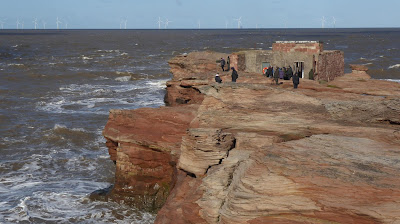 Then, as all drifted about the Isle there was the additional bonus for Kenny and myself, as the son of the original owners (they generously donated the building to the obs group decades ago) paid us a visit...memory lane was then walked for many a mile before we bid Nick a fond farewell. 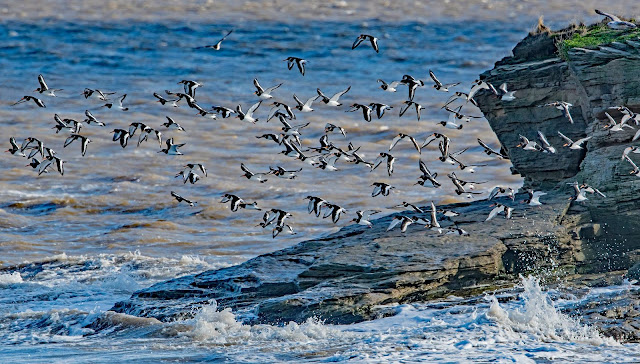 Middle Eye held its usual massed choir of Oystercatchers with some legroom left for Herring Gulls and possibly another species or two which could have been noted if effort had been made to look beyond the spectacle of so many assembled ‘Pied Clad Redbills’...

Wandering over and about our isle ...yes the tide was still holding us happily captive...took place for a further hour or so with some of the Team finding small gatherings of Turnstone and Ringed Plover whilst others simply allowed the isle to hold us in its welcoming arms before the waves parted and invited us to leave. 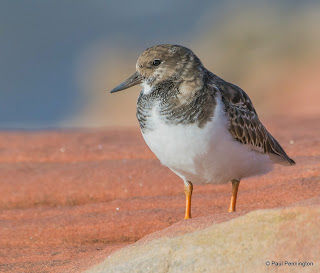 Then as the odd Little Egret swept by no doubt carrying a sign to Kenny that the dry was coming the bird log was called after which belongings were gathered and off we trooped over to west Kirby...

Breezy chatty footfalls then took all back to our start point within the hour and after a fond farewell to the Hilbre Team of One and his temporary Right Hand Man...All left with Hilbre isle smiles…it always does that to you!