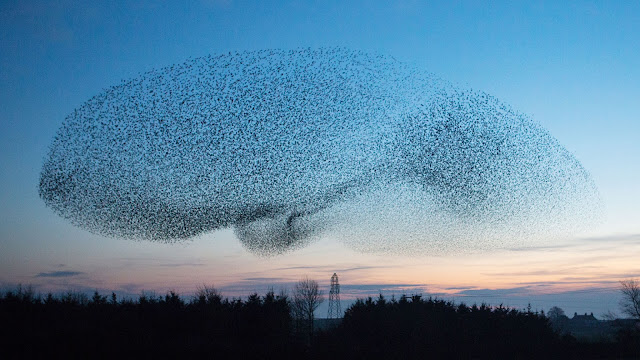 The Open University are asking for any photos or reports of starling murmurations between 1st November 2019 and 1st March 2020 to be submitted to their nQuire website:

'Please share your photos of starling murmurations and your experiences of observing them so that we can explore this great winter spectacle together.'

You could also record them in the comments underneath this post to inform L.O.S. members where to see them locally.
1 comment: 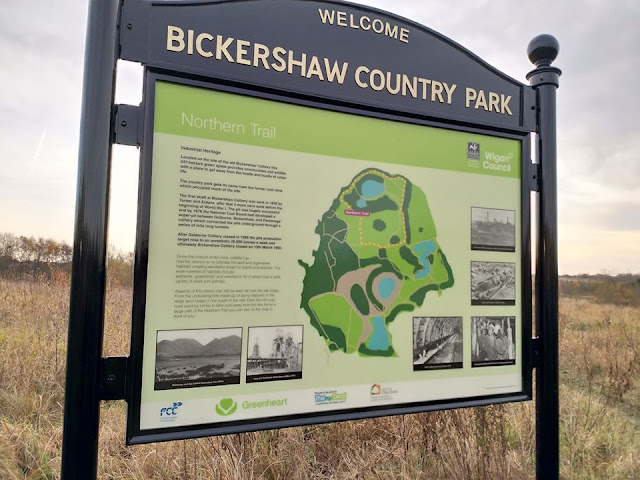 The area that has been known as "Bickershaw Rucks" or just "Bickershaw" now has its official signboard at the Smith's Lane entrance: Bickershaw Country Park! The board shows the northern circuit footpath very clearly, and on a walk round it today (admittedly with a lot of detours to snoop around copses and ponds!) I counted 234 Redwing, 1 Fieldfare (I'm sure there were more!) 64 Goldfinch, 2 Kestrels and 2 Buzzard, as well as hearing a Cetti's Warbler and a variety of our common species - 26 in 2 hours.

There are even some new benches around the site, once the concrete sets, though you may want to take along a bum-warmer as they are metal!! We need more observers there - it's an area where you work for your sightings, but let's use it so we don't lose it.
No comments:

A Letter From Our Conservation Officer

You will probably already know that Wigan Council is consulting with various stakeholders about future plans for Pennington Flash. The aim is to put together a "Masterplan" and there have been some quite radical ideas going about. We know people are worried about the introduction of new "leisure pursuits" which could potentially be damaging to the habitat and disturbing to the wildlife.

The Greater Manchester Ecology Unit, working with an Ecology Consulting firm called "Footprint Ecology", has put together a dedicated reporting page for Pennington Flash, and we would like to encourage all birders who visit Pennington to report their sightings via this web page. This is a particular push for 2020, and part of the focus is to get more data about what happens to birds when there is disturbance in any part of the Country Park. So please report ANY species of bird, mammal or insect, but of particular interest are any unusual sightings or unusual concentrations of birds in a particular location. For example, if there's a sailing race happening, you may see 32 Great Crested Grebe on the water in front of Ramsdale's reedbed. The web page allows you to report this down to that amount of detail, by means of a clickable map.

This is the special feature of this data gathering - it needs to be very detailed as to where things are seen. Much of what is on record at GMEU, for example, is just down as "Pennington Flash" and does not indicate where in the Country Park something has been seen.

The web page is really easy to use, although the map does take a little while to load. You don't even have to register - just insert your name and email address - but if you do register and login, you won't have to enter those details every time. Everything else is pretty much self explanatory.

This is the link to the data entry web page

Here's a link to Footprint Ecology

Members have expressed a little suspicion about bringing in outside ecologists. Please be reassured that this is not a big firm which works for big developers - the two consultants involved have both been keen birders from a young age, and their work is almost exclusively for local councils and nature conservation groups such as the Wildlife Trust. I have spoken at some length to Durwyn Liley of Footprint, and will be meeting him in early December. He is more than ready to listen to LOS and others from the local area, and to use our records as well as those generated during the survey year. I think it is a positive sign that the Council have commissioned this survey before rushing into development of the Country Park or additional leisure projects.

I hope you will consider contributing to the survey whenever you visit the Flash from now and through 2020.

A comment on my recent post.
ThomasMike Norris David, The Flash is multi-user facility. Your comment about Water-based activities just assumes that it should only be for wildlife. The survey itself takes no account of any use other than bird watching
No comments:

The following link is for submitting records to assist with a disturbance survey.
It's your chance to make sure the flash is protected from more water-based activities.
recording/pennington_flash_strategic_masterplan

Thanks for your support: David Shallcross Chairman
No comments:

Our third L.O.S. Fieldtrip of the season took us to Leighton Moss RSPB, always a popular destination for the Society and Guests.  With travel arrangements made, the group of 16 gathered as planned just before 9am on the RSPB Leighton Moss car park. Conditions favoured us, in the eye of the storm so to speak. Slightly overcast with intermittent bursts of sunshine, but more importantly deadly still. This would help with the quest ahead.

We had a strategy, a target bird. One that is popular with visitors to the site at this time of year. The Bearded Reedling (Tit). We headed out on the reserve and out towards the Grisedale Hide area. Firstly we stopped off at the feeding station. Here the usual birds Chaffinch, Blue tit, Coal Tit, Goldfinch, and Greenfinch, all at close quarters flitting between the feeders.

Working our way slowly towards the afore mentioned hides, stopping occasionally at various points. One such stop, the famed feeding log, Nuthatch, more Blue Tit, Coal tit etc, plus a Marsh Tit, which was a lifer for James, one of our younger birders. Above us high in the Alders, Goldfinch mixed with Siskin. A little further on, a Water Rail darted across the path then back into the scrub and the security of the reedbed.

We worked our way down the well maintained gravel footpath, ( which it was hard to believe a week earlier was under a good foot of water ) through the corridor of head high Phragmites reedbed, eventually arriving at our destination, with the hope of seeing our target birds, the Bearded Reedlings.

Here the manicured opening of the reedbed, cut back to make an open space, some ten by ten square meters, with two small grit trays posted in the left and righthand corners. Now for the waiting game.
Sixteen of us stood by the reedbed opening and waited. Some fifteen minutes passed and nothing, and as one of our members would describe, remarkably birdless.

As the Grisedale Hide was only a very short distance along the pathway, the majority of headed off there, and left three of us on watch, in case the Bearded Reedlings turned up. At the hide, Marsh Harrier, Teal, Snipe and Pintail were the main attractions for the majority of the group

Three of us still waiting for the Bearded Reedlings to show, Water Rail squealed around us in the reedbeds, Long Tailed Tits manouvered through the scrub Willow. Then there was movement, something caught our eye through the reedbed, was this the Bearded Reedlings? A message was sent to the rest of the Group in the Grisedale hide, but as the group regathered by the grit trays, a false alarm! A solitary Male Reed Bunting came and went.

This time the party decided to visit the close by Jackson hide, again leaving three of us on watch. We entertained ourselves by hand feeding a very tame Coal tit and Robin as we waited.

The three of us had now been waiting near on two hours holding the fort for the others. Then!! through the tranquillity, was that the faint ' ping ping' we could hear, the unmistakable call of the Bearded Reedling? Was this the moment? Then like some magical illusion, two males, three females, closely followed by two further females, appeared from within the Reedbed. The Bearded Reedlings were here, and in force.

A quick call to the Jackson Hide, the rest of the group gathered to witness these wonderful, dainty little birds at close quarters, with their distinctive plumage. Then some 15 minutes later, as quickly as they came, vanished back into the vast reedbed. Certainly the highlight of the day.

After the excitement of the morning, goal achieved, we returned to the car park for a spot of lunch, a group photo, and as we planned out next move, a fly over of Whooper Swans.

Three would head off towards the Allen and Eric Morecambe hides, the rest would eventually meet up with them later. The main body of the group would head out via the Causeway. Along the way we would see a female Kestrel, Pochard, Shoveler, Mute Swan, and the usual Cormorant.

Eventually we met up with the rest at the Allen and Eric Morecambe Hides. Here there were a large flock of Black-tailed Godwit accompanied by the odd Dunlin, Wigeon, numerous Lapwing and Redshank. a handful of Little Egret as well as a single Common Sandpiper. A distant Peregrine Falcon sat on the fence posts and a scattering of Shelduck swam in the pools.

Other birds of interest on the day included Lesser Redpoll, Cetti's Warbler. Treecreeper, Bullfinch, a skein of Pink-footed Geese and a single Goldcrest.

All in all a fabulous day out. Target achieved, along with some 66 species. Leighton Moss is always worth the effort. So on that note, we mustn't forget the social aspect of these trips which are aimed at various levels of birding knowledge and which are filled with the usual great humour. Everyone is welcome.

Thank you all for your company and support.