Our penultimate trip of the season took us to St Aidan's RSPB and Fairburn Ings RSPB. The L.O.S. party met just before 9am on St Aidan's car park, greeted by overcast conditions and a very bracing south-easterly wind. We had already bagged Grey Partridge by the entrance gates. 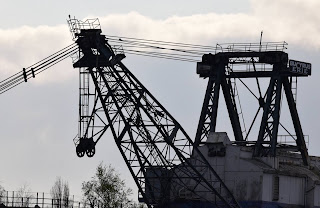 After we had all kitted up, and finalised our plans for the day, the group briefly paused by the old opencast Coal Dredger adjacent to the car park in hope of views of the resident Little Owls, but alas even the Owls thought it too cold to make an appearance.

The team worked its way downhill into the vast bowl, once an open cast mine, and a magnificent view over the whole reserve. 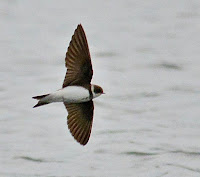 The big lake to our left had a multitude of Sand Martins skimming the water, twisting and turning as they hunted for insects.

It wasn't long before the group got its first major sighting of the day. A small group of Pink-footed Geese keeping a Tundra Bean Goose company. A first for many, including myself.

After 15 minutes or so viewing the Tundra Bean Goose we headed off towards the causeway in search of the famed Black-necked Grebes. Along the way the usual ducks Tufted, Gadwall etc. were recorded.

The odd Skylark, Reed Bunting and good numbers of Meadow Pipit displaying, climbing into the air, parachuting back to earth like shuttlecocks with the repetitive sip, sip, sip call rising steeply as they descended to the ground. A warming sight in the biting south-easterly wind. 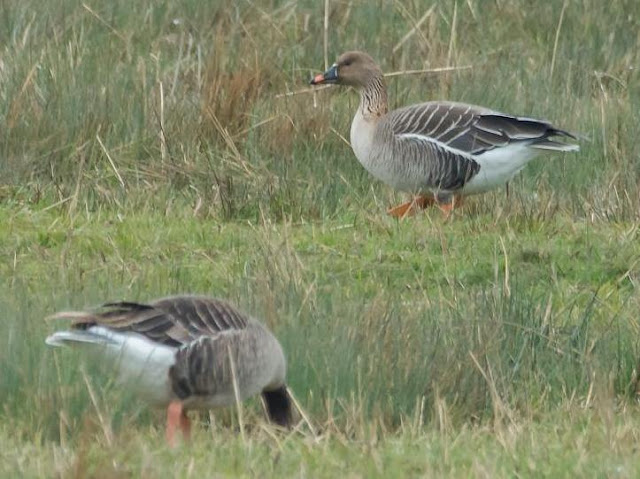 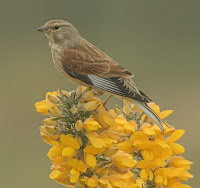 Moving further toward the causeway Bittern were heard booming occasionally. Linnet, Oystercatcher, Pochard and Wigeon were recorded amongst the deafening orchestra of excitable Black-headed Gulls in their hundreds if not thousands.

On arrival at the causeway we found the Black-necked Grebes. Four at first, hugging the tall Phragmites reedbeds. We spent a while taking in the sheer beauty of these little birds, that are mostly black with copper red sides and that unmistakable golden fan behind a piercing blood red eye. 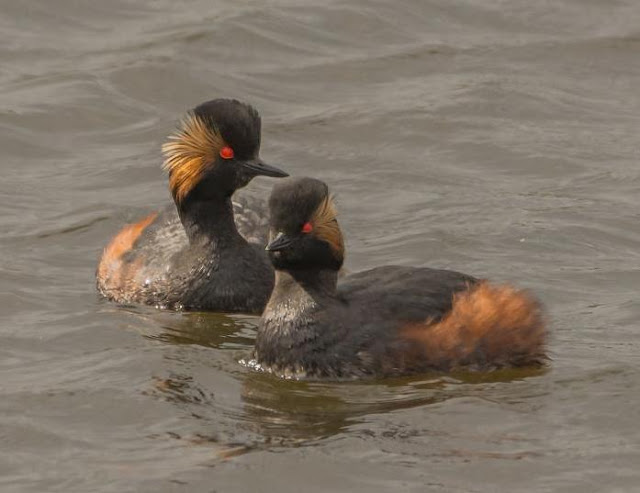 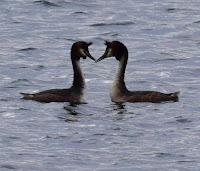 Peter and Jeff got a brief glimpse of a Bittern. Within seconds like a Penn and Teller magic show it vanished into the wall of reeds. Never to be seen again.

Great Crested Grebes were also about with some doing parts of their mating dance and making classic shapes on the water. 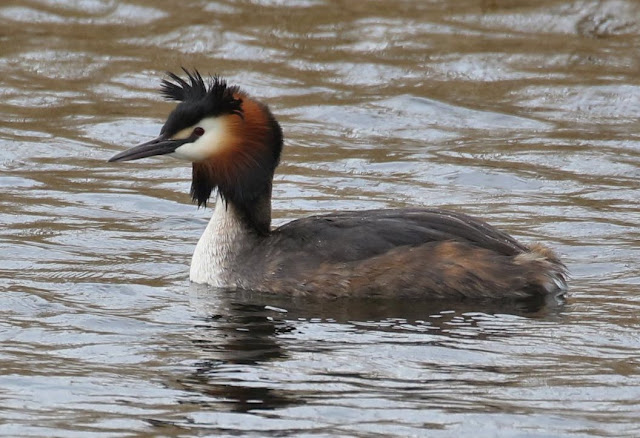 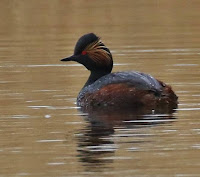 Working our way round the reedbeds, more Black-necked Grebe, making it nine in total. A Willow Warbler called from some small trees to our left, eventually giving us a brief glimpse before moving on.

The same area also a Cetti's Warbler calling, before darting to the far side of the wide ditch and back under cover. More Cetti's Warbler, Willow Warbler and Chiffchaff were heard but not seen before reaching the large pond at the far end of the reserve. 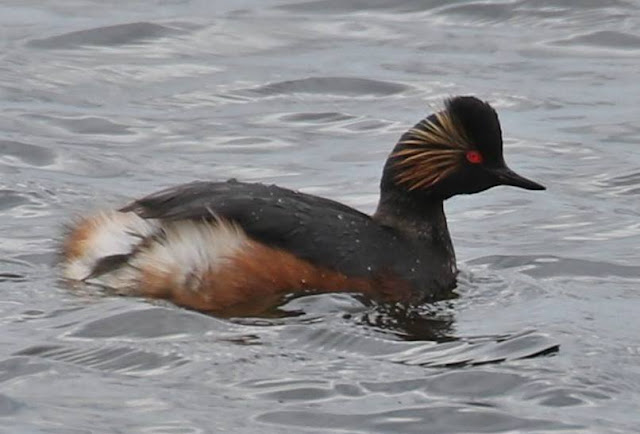 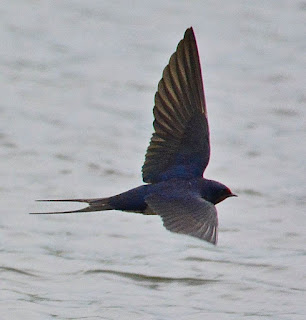 At the large pond three hirundine species were hawking over the water. It was good to see the Swallows, House Martin and Sand Martin at close quarters, a sign of warmer days. Also a male Kestrel hovered in the biting wind close by and a Sparrowhawk on the far side.

After a brief lunch and a warming brew at the visitor centre we head over to Fairburn Ings RSPB only some ten minutes away.

On arrival at Fairburn Ings, most of the group decided to circumnavigate the Main Bay and Village Bay lakes. We left two of the ladies at the visitor centre with a warming coffee on feeding station duty. 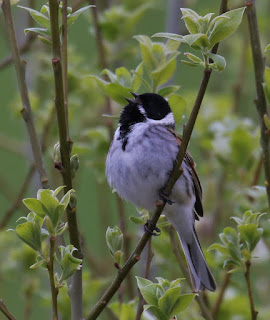 Fairburn Ings is the site of a long-disused Limestone quarry It runs parallel to the River Aire, down which the Limestone was transported to its destination. It is a relatively young site with a couple of hides and our first sightings were Long-tailed Tit, Great Tit and Blue Tit, which helped boost our bird count numbers.

Eventually, we reached the Bob Dicken Hide. Here Avocet and Little-ringed Plover were the main attractions. The Village Bay Viewpoint produced more of the same and the party quickly moved on. On arrival at Charlie's Hide, and somewhat out of the still bracing wind, Blackcap and a constant yaffle of the Green Woodpecker.

From the hide again a Little-ringed Plover but photos were difficult to come by. 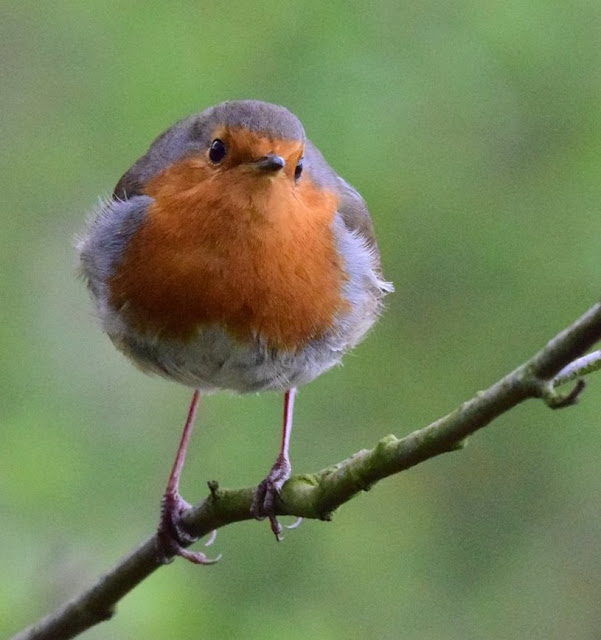 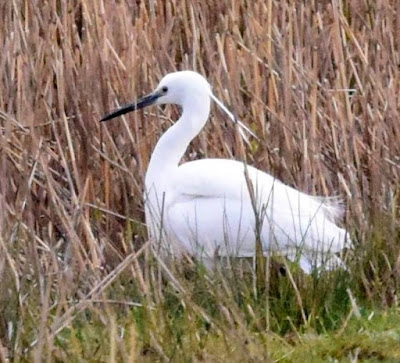 Here the party split into two groups, some headed back the way we had come, the rest went in search of the Green Woodpecker. A few hundred yards down the path and running out of large trees, we eventually caught sight of this elusive bird distant and difficult to see atop an old dead tree.

Eventually, it flew back toward the hide area and we headed on our merry way across a sheep field, only to flush a second bird as we crossed. The sheep field also produced a solitary Red-legged Partridge, which we would see three more of in the ploughed fields adjacent to Newton Road, a couple of Brown Hare and three Buzzards on our way back to the visitor centre. 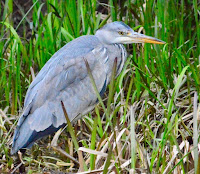 Meanwhile, the other party called back to the Kingfisher Screen close to the visitor centre and saw not one but two Kingfishers, a great bonus for them.

The ladies we left in the visitor centre on feeding station duties added to our tally, picking up Greenfinch, Bullfinch and Tree Sparrow. But making it all worthwhile by seeing a Fox cross one of the paths by the feeding area.

Some of the team decided to pop up to the Lin Dyke area before going home in hope of the reported Spoonbill, but had no luck as it was hidden some great distance away behind a bank of willow trees.

As the weary team made the return journey home they could all be very pleased with the day, as it brought us some 73 species, Brown Hare and a Fox.

As usual, great company and banter. Thank you all for attending.