This is the presentation video I did for the recent 50th Anniversary Open Day and Queen's Award celebrations highlighting the many different types of work and activities we do. Don't worry, there is no sound!

We have had Open Days before, or course, but never like this one. It was unique in taking place during the Coronavirus pandemic, after several lockdowns and an intensive immunisation campaign. It was unique, too, not only in its celebration of our 50th Anniversary, a great milestone in itself, but also in being the occasion of the presentation of the Queen’s Award for Voluntary Service. Here's a copy of the certificate we received signed her Her Majesty, Queen Elizabeth II. 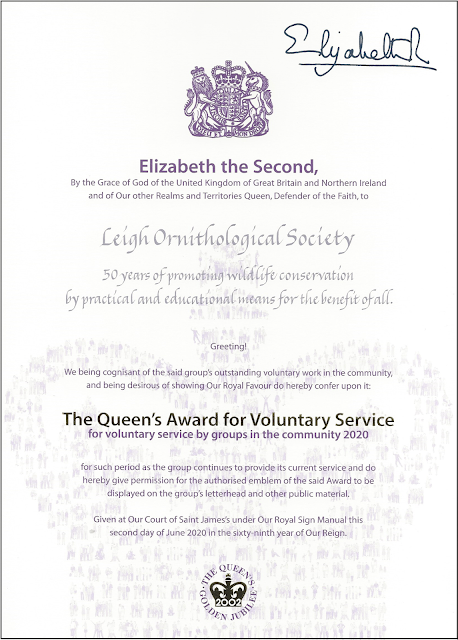 Not surprisingly, there was a bit of an air of uncertainty over organising the event – not through any lack of effort and enthusiasm from Martyn Jones, who took the lead, ably assisted by George Pike and Tony Bishop – but because the arrangements at the library were subject to change, and let’s be honest, nobody really knew how many members, friends and invited dignitaries would attend. Angela Pike, LOS Secretary, did a great job with publicity, using posters in favourite spots like the Pennington Flash hides, and alerting local newspapers and media. 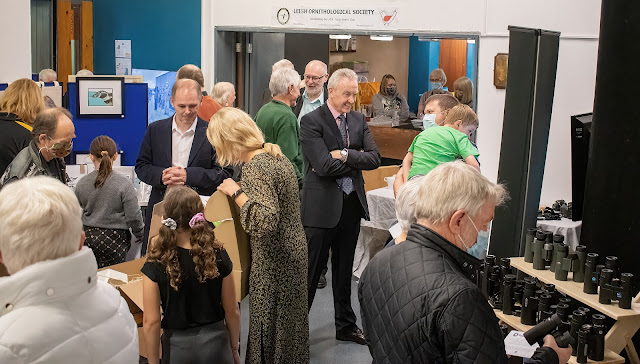 But we had only just begun to get used to mingling with other people again, and an indoor event would not be comfortable for everyone. In spite of this, plenty of groups and individuals were keen to exhibit, and on a pleasant autumn morning, we got together at Leigh Library to start setting up. 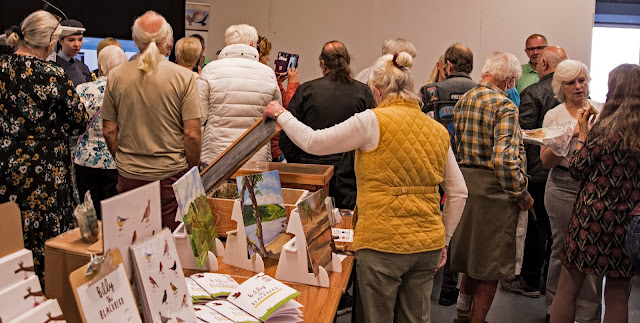 Wayne Reedman at the Library seemed to be everywhere and made things easy as various exhibitors began to arrive. There was a buzz, a sense of expectation. Early on, the arrival of the team from Wild Wings was a highlight, as sizeable containers looking like money safe boxes were carried upstairs, each bearing warnings that they contained live birds. Soon, beautiful Tawny and Barn Owls, a sleek Peregrine Falcon and a magnificent and rather haughty Goshawk were settling onto perches in the Derby Room.

This was beginning to look good! By the time the first visitors arrived, the room was full of fascinating exhibits – from a children’s book writer to a Swift conservation group, and from local artists through to Hedgehog rescue and Focalpoint Optics who kindly brought a selection of binoculars and scopes for people to try and were busy for much of the time. 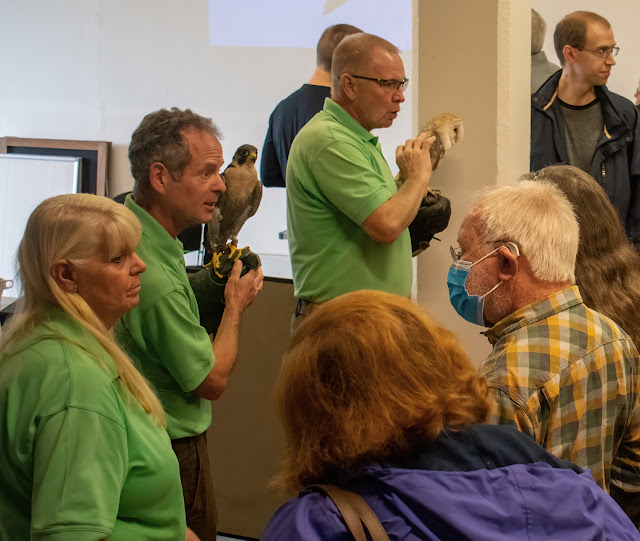 The much-anticipated hour of 11 o’clock saw the presentation of the award to our Chairman, David Shallcross, on behalf of LOS, by a Deputy Lieutenant of Manchester, Steve McGuirk. This took place in front of what was by now a full crowd of members, friends and dignitaries including MP’s James Grundy (Leigh) and Chris Green (Bolton West), the Mayor of Wigan, Cllr Yvonne Klieve, escorted by the Borough Cadet, Megan Lawrence, the Deputy Leader of Wigan Council, Cllr Keith Cunliffe, Cllr Fred Walker, Cllr Susan Greensmith, Lady Joy Smith (another Deputy Lieutenant, who mentored us through the award process), Mrs Elizabeth Haworth who actually made the nomination for us, former MP and friend of LOS, Jo Platt, and Mr James Winterbottom, Director of Digital, Leisure and Wellbeing at Wigan Council. It was a pleasure to see our friends who wrote supporting letters for our award: Alderman Susan Loudon, Mrs Avis Freeman, and Mr John Preston. (Mr John O’Neill also wrote on our behalf but was unable to attend.) 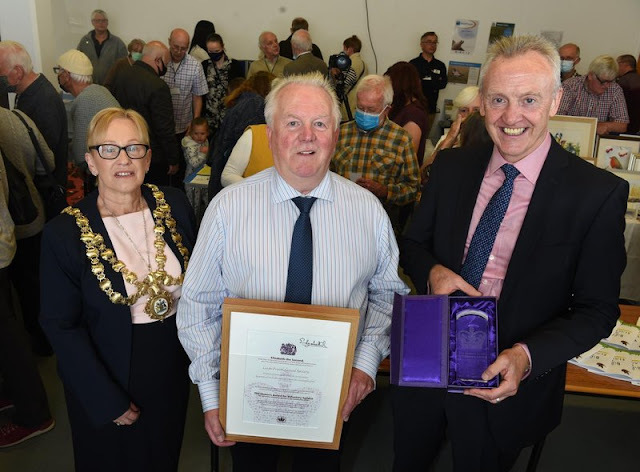 In a sign of the times, David Shallcross invited people to wear masks while we were standing close together for the big event. Steve McGuirk explained the nature of the Queen’s Award and read out the citation he had written in putting forward LOS for consideration at the Palace. He emphasised how much more we are than an ornithological society, especially our historic role in environmental conservation, long before it “became fashionable”. “This is an impressive group of volunteers.

When I started my assessment, I was not expecting to encounter the breadth of activity the society undertakes.” After the formal presentation of the certificate, complete with Her Majesty’s signature, and the ‘Domed Crystal’ award, David responded and acknowledged everyone’s warm and enthusiastic applause, describing what a major honour it was to receive this prestigious award on behalf of the society. He went on to pay tribute to “the hardworking committee and officers, valued members, volunteers past and present, not forgetting the society’s founders in 1971, and the pioneer naturalists as far back as 1938, such as Tom Edmondson, Frank Horrocks and Tom Durkin, to name just three.” 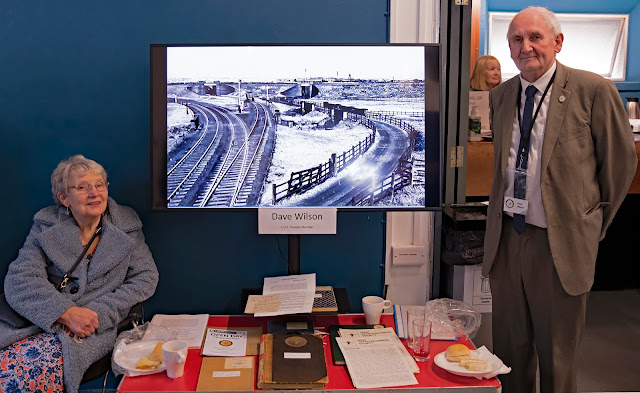 David also applauded the “monumental contribution” of founder member, Dave Wilson. He also thanked the Lady Smith, DL, for mentoring us through the considerable application stage for the award, and our friends (mentioned above) who kindly wrote supporting letters. In conclusion, David warmly thanked committee officers Martyn Jones, Tony Bishop and George Pike for all their work in organising the 50th Anniversary and Queen’s Award Celebration. 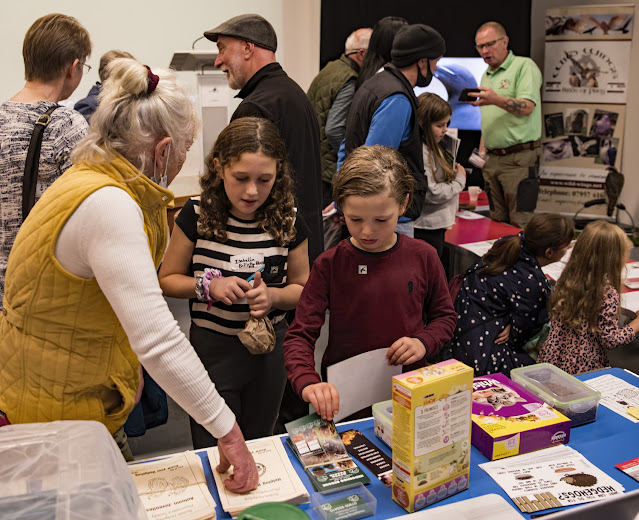 Responding to the Chairman’s invitation to say a few words, Dave Wilson assured us that it was right to feel a little sentimental and emotional, looking back over the society’s history, but then reminded us that perhaps the most significant stage still lies ahead of us: what we will leave for future generations. Not one of us is likely ever again to hear the call of a Cuckoo in our locality. So many species are on the “downward slide”. He encouraged us to use our votes and our influence to protect our local green spaces. “They might look rough” – but they are havens for declining species such as Skylark, Lapwing and Partridge. 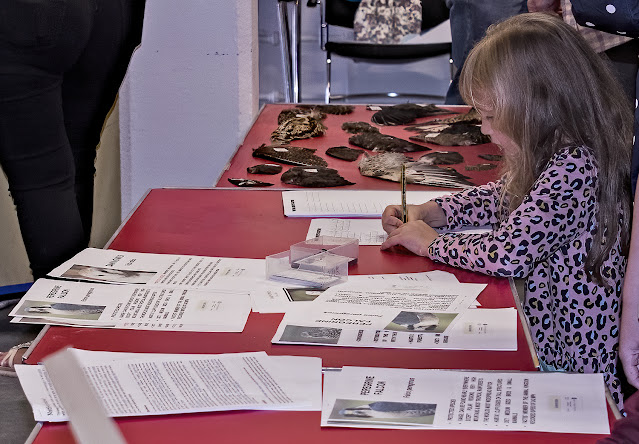 To say now that everyone went off and enjoyed the exhibits, and our special guests and exhibitors partook of a very pleasant buffet, makes the rest of the day sound a bit of an anticlimax. Not at all! New visitors kept coming, allowing families and children particularly to enjoy the wonderful live birds, and the enthusiastic explanations by their handlers from Wild Wings. 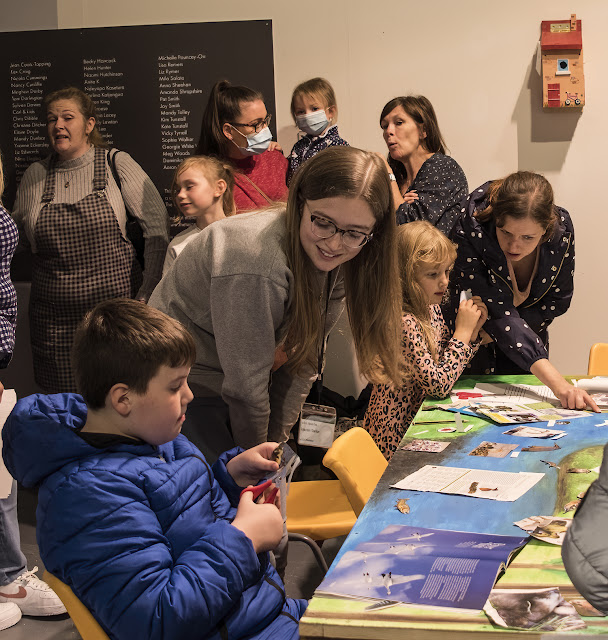 In the ante-room of the adjacent Turnpike Gallery, children from St Thomas’s Primary School and other visiting kids enjoyed learning about bird habitats in a giant-sized cut-and-stick exercise, locating photos of bird species on to (more or less) the correct location on two superb landscape paintings by Jaimie Ball. Refreshments were available throughout the day, as Pat Bishop and her team kept the water hot and the chocolate biscuit supplies topped up. 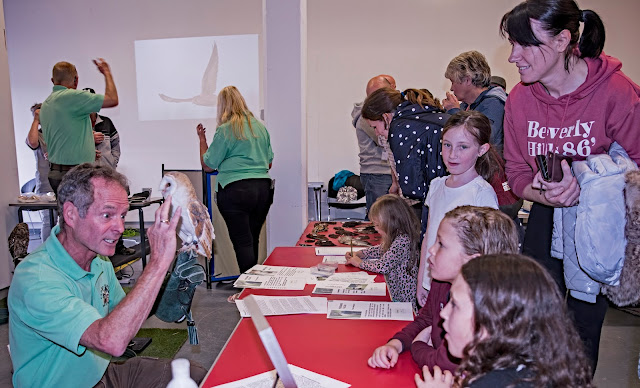 By the time 3pm approached, everyone involved was a little footsore but more than happy with the excellent attendance, and of course a unique and proud moment in the Society’s history, the presentation of the Queen’s Award.

We are so grateful to everyone who gave their time to make the event such a success, and of course especially to mastermind Martyn, along with George and Tony, whose organisation created something which was both a re-launch after the restrictions of the pandemic, and an ideal way to mark the award. It was an unforgettable day in so many ways, coming after many months of restrictions and isolation during the pandemic, and helping to give all of us a sense of hope and a new resolve to value, record and conserve our remarkably diverse local environment.
Text by Paul Richardson
Photos by David Boardman and Martyn Jones
October 2021
List of Exhibitors:
David Boardman recorded the event in photos, and refreshments were served by Angela Pike, Pat Bishop, Anne and Hazel Johnson and Jean Richardson.
2 comments:

This is the video of our Open Day presentation. The first shows Mr. Steve McGuirk, a Deputy Lieutenant of Greater Manchester presenting the Queen's Award for Voluntary Service to our long-serving Chairman, Mr. David Shallcross.  Select HD in the Settings if you can.
The accompaniment is a Goshawk, sweetly singing in the background - very apt!
The second video shows Mr. David Shallcross's response speech.
The third and final video show Mr. Dave Wilson's speech:
1 comment: 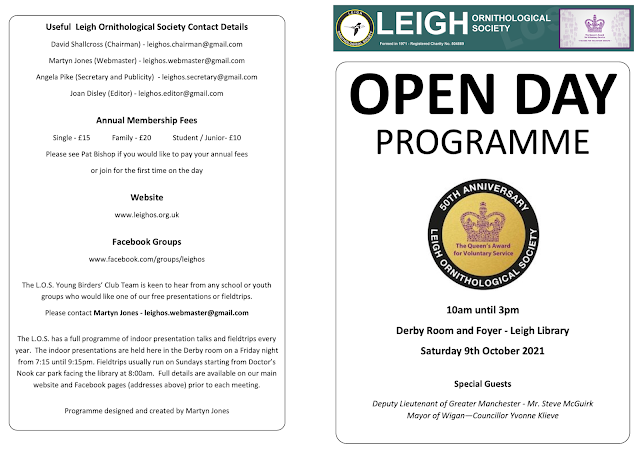 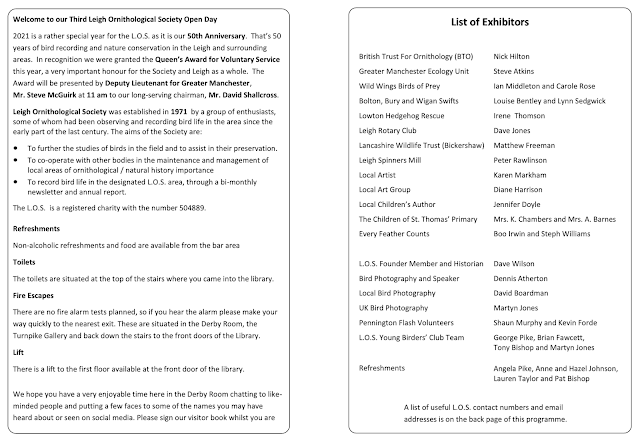 We Made The Local Press! 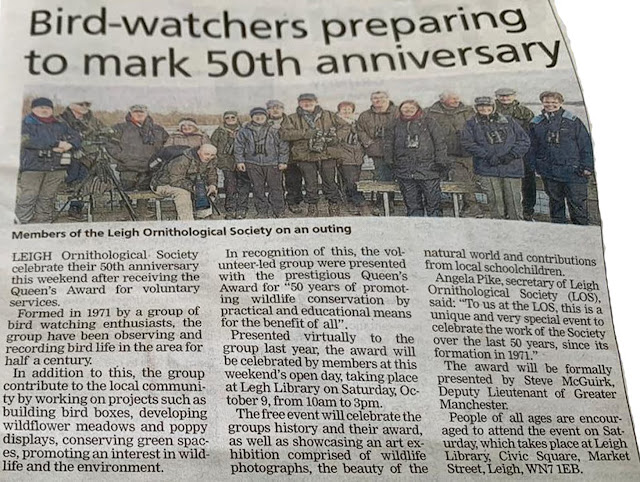 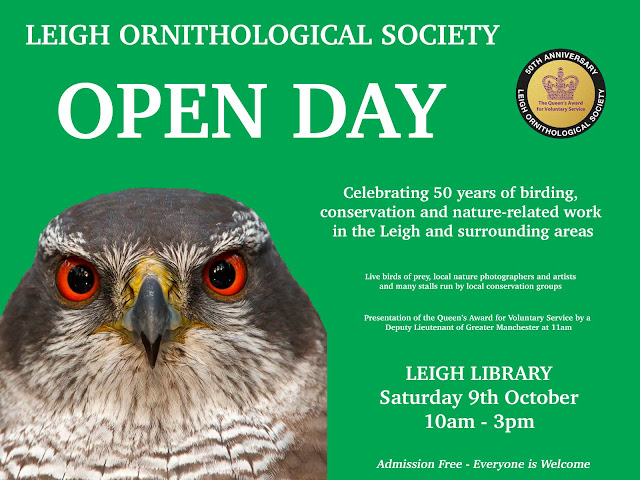 This year marks the 50th Anniversary of Leigh Ornithological Society and to cap it all we were given the Queen's Award for Voluntary Service, which is the equivalent of an MBE for volunteer groups.

To celebrate we are having an Open Day at Leigh Library on Saturday 9th October from 10am until 3pm. At this event the Deputy Lieutenant for Greater Manchester will present the Queen's Award to our Chairman, Mr. David Shallcross.

But there will be much, much more to see including representatives and display stalls from:

Refreshments will be available upstairs in the Derby Room.
So come and meet the friendly members of Leigh Ornithological Society and find out about what we and other local groups do in the field of nature and conservation in the Leigh and Wigan area.
Everybody is welcome and Admission is Free - please feel free to wear a mask if so desired.
No comments: