We have a Winner !

After weeks of looking at all the excellent designs submitted by pupils from four local primary schools, the L.O.S. Young Birders' Club finally has a winner for our 'Design a Logo' competition.  We're sorry this has taken a little longer than anticipated, but the standards were very high and it was difficult to choose just one winner.

Well done Kimberley, the L.O.S. Young Birders' Team will also be visiting your primary school to present your prize soon.  Here is Kimberley's logo and you will also be able to see it at the top of our LOSYBC webpages for the next year.

Some of the designs which gave us such difficulty in choosing are now available to see in our LOSYBC artwork gallery page here.
1 comment:

The L.O.S. Young Birders' Club met at Pennington Flash for the second time on Easter Sunday.  It was quite cold but very sunny and so the prospects for bird sightings were good. British Summertime had started in the early hours of this morning and so our 10am start was really still 9am for the birds!

Armed with checklists and a set of identification photographs, the youngsters were all very keen to record as many birds as possible.  Pairs of binoculars were lent to those who needed them and a scope was set up for viewing distant birds.

We actually spent far longer on the car park than anticipated but there were such a lot of birds to see on the Flash, including Goldeneye, Wigeon, Great Crested Grebe and Common Gull as well as the 'usual suspects' of Tufted Duck, Coot, Mallard,  Mute Swans and Black-headed Gulls.

We were treated to an extended flypast by our resident Muscovy Duck (probably a collection or farmyard escapee) with two of the L.O.S.'s most experienced birders (David Wilson and Roy Rhodes) both saying that they'd never seen one fly so far before!

Seven members of the L.O.S. were on hand to give help and guidance where needed, although it has to be said that some of the youngsters didn't need it.


We were all very surprised as a Gull quickly flew past and when asked what it was, Kristian quickly replied, "A Common Gull ". And after Roy Rhodes had checked it out with his scope,  the young birder was proved to be absolutely correct! 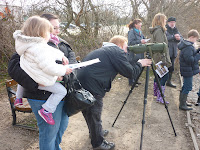 With the checklists completed for this area, we next visited Horrocks' Hide where most of the birds were quite distant.  The usual pack of Cormorants were on the end of the spit, with some holding their wings out to dry in a characteristic pose.  There were also many Gulls present, including Black-headed, Lesser Black-backed and Common Gulls. The keen eyes of the L.O.S. members managed to point out both Redshank and Snipe to the party, the latter of which are very hard to spot. 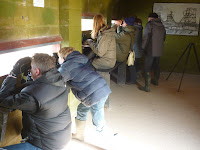 From here we went on to Bunting Hide feeding station which rarely fails to please.  The birds here are much smaller and many are referred to as LBJ's (a technical birding term meaning Little Brown Jobs) as they often move too fast to be seen clearly.  But at this location you will always get a good view without any special equipment except for your eyes, and particularly when there is food on the tables.

Here's the full list of what we saw:
That's 12 species from just one hide in no more than 15 minutes!  Not bad, eh?  The youngsters were fascinated watching the birds coming and going around the feeders and tables here - sometimes it was a hive of activity with many species on view at the same time, and then suddenly they flew away because something had spooked them, such as a loud noise or a nearby Sparrowhawk.  It wasn't be long before they came back though. 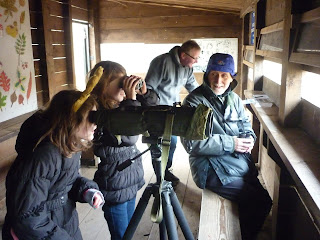 Finally we had a quick look in Teal Hide where we saw Goosanders, Shovelers, Gadwall and, of course, Teal.

And that was that -  a very pleasant morning spent in the company of some enthusiastic young birders and their families. A total of 42 species were seen during our 2 hour tour of the hides.

If you're interested in coming on one of our guided walks, look in the 'Meetings' section of this website for details of the next one, which will be in late April or early May.


P.S. You can click on any of the bird names in this report to find more information about each bird from the RSPB website.
2 comments: