This was the first trip of the new session and in theory should have been a good trip with some not so common birds to be seen. In actual fact it turned out to be a bit disappointing with not many birds to see, mainly due to a high pressure system over the UK.

However, we did do a lot better with the weather than expected as we had sunshine which had not been promised so it ended up quite warm. 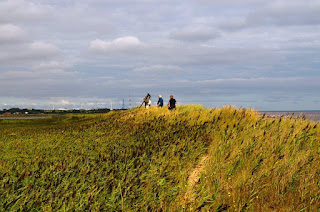 From the car park and in fact all day there were a lot of Swallows flying round and also a number of House Martins. On one nearby building there was a whole line of House Martin nests just under the eaves along its front and we saw a few birds still entering the nests.

We had Pied Wagtail and later Joan saw a Grey Wagtail; House Sparrow and a number of Starlings were seen through the day.

As we walked along a path, heading for a distant pool all we were seeing were birds such as Blue Tit, Great Tit and Blackbird but we did eventually see Linnet and a few members saw a Wheatear perched on a fence when level with a gap in the hedge. 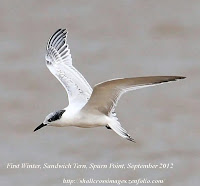 Over towards the sea there were a group of Sandwich Terns and an unusual sight of a Heron flying over the sea. As the pool came into view we could see a number of white birds on some small islands and when we asked a couple walking away from this area they told us they had some good views of four species of Tern so it was looking promising. We made our way straight there but when we arrived there wasn’t a Tern in sight, all there was on the pool was 2 Mute Swans and 2 Cormorants. After a wait 2 Redshanks flew in and a small group of Sandwich Terns flew round the pool and one did land but the others flew away again.

We decided to make our way back to the cars to eat our sandwiches and while we were walking along we were seeing wild flowers such as Rest Harrow, Common Fleabane and Field Bindweed with its pink flowers that have white stripes on them plus some Sea Holly nearer to the sea and the Hawthorn hedges we passed that now had lots of berries beginning to turn red.

After we had eaten we planned to drive along to the far end of the “point” but this didn’t work out as the road was closed because it had been damaged due to bad weather.

We then decided to walk part way along the road to see what was on the estuary side but as the tide was out all the birds were spread out over a large area and a lot of the time we were looking into the sunshine so didn’t have a good view of the ones nearer to us.

What we did pick out were Curlew, a number of Golden Plover, Ringed Plover, the odd Turnstone, a lot of Shelduck, 2 Little Egrets and a single Swift flew past us. 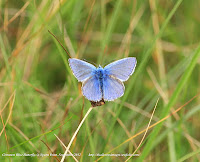 At least the sunshine brought out other things of interest such as some Common Blue butterflies and earlier we had seen Small Tortoiseshell and Peacock. Also earlier Eddie spotted 2 small lizards enjoying the warmth of the sun. From their small size and dark colour I would think they were young ones.

A quick check in another usual spot for birds but this again gave us nothing so we decided to head for home as it was a long journey back.

Thanks to Al for organising the trip and of course to Joan and Jim for a safe journey both ways.