John's images are mainly from around his home patch of Turton and Edgworth and he will be passing on some tips and information as to how he achieved these images. This is John's third visit to the L.O.S. and I'm sure we're in for another great evening with spectacular photographs and a very interesting commentary.

So please come and join us at the Derby Room in Leigh Library at 7:15pm
All are welcome, members, friends and non-members.
No comments:

Few who visit Pennington Flash nowadays knew Tom Edmondson, the true pioneer of local conservation, but many visit and enjoy the hide there named in his honour and probably wonder who he actually was. Unfortunately, Tom passed away recently and the following tribute is reproduced with the kind permission of its author and friend of Tom, David Wilson: 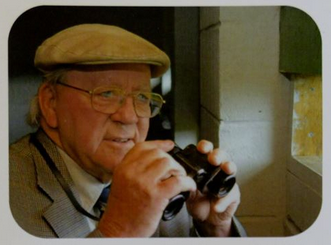 For the past several days, the first sounds of the outside world, well before first light, have been delivered loud and clear, and with gusto, by our garden Blackbird, but this morning, under a heavy grey sky, all was quiet until the plaintive notes of a distant Mistle Thrush heralded a new day. It was appropriate that the solo should have been delivered from somewhere in the Pennington Flash Country Park, for it was this very special site that had drawn Tom Edmondson into nearly a lifelong involvement in nature conservation, and today was the day of his funeral in Chester.

I suspect that I was the only person from Leigh, his home town, among the thirty or forty who had gathered to bid farewell in a service which included screens showing pictures of Tom with friends and family during a long and fruitful lifetime. The occasion, from beginning to end, was highly dignified, with spoken contributions by his son and two grandchildren and a fine selection of music and poems. The informal procession into the chapel was to the accompaniment of a fine rendition by Amanda Roocroft of Puccini's aria "O mia bambino caro"; the centrepiece was Edward Elgar's masterpiece 'Nimrod' played by the Halle Orchestra; and Tom's last farewell was to the strains of "Abide with Me."

"Tom" and "The Kingfisher" were fitting titles for two of the poems, the third one, remarkably, being one of the favourites of his near-contemporary, Frank Horrocks - "Happy the Man" by John Dryden:-

"Happy the man, and happy he alone,
He who can call today his own:
He who, secure within, can say,
Tomorrow do thy worst, for I have lived today.
Be fair or fowl or rain or shine
The joys I have possessed, in spite of fate, are mine.
Not heaven itself upon the past has power,
But what has been, has been, and I have had my hour"

Upon my return to Leigh, I went to the Flash and pinned copies of the funeral service leaflet to the notice boards outside the hide named in his honour and in the information centre.

Tom often expressed his delight that a small, once-upon-a-time industrial town in Lancashire should have managed to produce and foster a Society which, through its commitment, industry and love of our natural heritage, has had a huge influence in shaping our green habitats for wildlife and human appreciation and enjoyment alike.

I'm certain that Tom's greatest wish would be for all of us to recognize the importance of continuing to promote nature conservation into an increasingly uncertain future. We owe it as much to our natural environment and all its dependent creatures, and the spiritual wellbeing of those who follow us, just as much as we owe it to the memory of a great man.

As usual we are meeting at Doctors Nook car park facing Leigh Library (WN1 1SX) for an 08:30 hours departure. We'll be parking up on Weir Lane in Woolston at approximately 09:00 hours (WA1 4QH) and walking down the path to the main entrance on the bridge takes approximately 20 minutes.

We'll be spending a couple of hours on site before departing for Moore Nature Reserve (WA4 6XE) where we are meeting the warden at around 13:00 hours for a 1 hour guided walk with a little local knowledge thrown in. Then we can try and pin down the Lesser Spotted Woodpecker ourselves.


There is a small charge of £2.00 per person for this trip, which is for the upkeep of Woolston Eyes.
If you are planning on joining us please email me leighos.trips@gmail.com or telephone me on 07930948392 to give some idea of numbers.