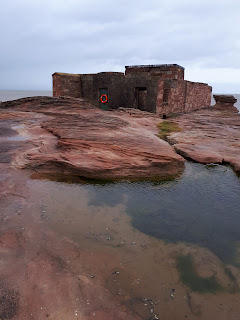 Our next L.O.S. Fieldtrip is on Saturday 27 October to Hilbre Island on the Wirral. We will be meeting on Doctors Nook car park at 7.45am opposite Leigh Library. Please note that this is a Saturday trip and that parking is currently free for anyone wanting to leave their car in Leigh and car share.

For those going directly there could you please let Paul Pennington our Fieldtrips Officer know, as we will be meeting at the Wirral Sailing Centre building at the north end of West Kirby Marine Lake, opposite Morrisons on the junction of Dee Lane and South Parade (postcode CH48 0QG) at 10am prompt. Leave your car anywhere on South Parade which runs alongside West Kirby Marine Lake where parking is free.

At 10am we will be guided across the estuary by one of the birders who run the bird observatory there, Kenny McNiffe. Ken will give us some of the Island's history and show us round. It is important that we all take a packed lunch and wear suitable waterproof clothing in case of poor weather. It would be a good idea to wear wellingtons if you have them as we may need to walk through some shallow water enroute and especially coming back.

It takes roughly one hour to reach the Island from West Kirby Marine Lake, so it's a bit of a walk. On reaching the Island Ken will take us to the Bird Observatories Council (B.O.C.) building which is the base for bird recording and ringing on Hilbre. There he will give us a short briefing before the tide comes in and then we will be marooned on the Island until it goes out again.

High tide is at approximately 1.15pm and it will be just after 4pm before we can return to the mainland. There was some talk of a vehicle to take our equipment over to the Island, but chatting to Ken this cannot be guaranteed, so please be aware that if you are taking cameras, scopes, tripods etc that you may need to carry them all the way there and back.

Useful Websites:
Birds of note which could be seen include Common Scoter, Red-throated Diver, Brent Geese, huge flocks of various waders, and Atlantic Grey Seals at close quarters. There have been recent sightings of a Yellow-Browed Warbler and if we are lucky we may get to see a bird or two ringed in the B.O.C. building.

This is a bit of an adventure, and one not to be missed if you haven't visited the Island before.

The Manchester Raptor Group – its History and Work

The group began life as the Mosslands Barn Owl Conservation Group, founded in the mid 1990s when it was clear that Barn Owl numbers were at an all-time low in Greater Manchester. Not much was known then about distribution, other than a few well-established sites where pulli had been ringed by the Leigh Ringing Group, which had put 96 boxes up in the 1970s or before (per former L.O.S. Conservation Officer, Roy Rhodes).

Boxes were made by Dennis Price and members of the Leigh Ornithological Society and Wigan RSPB. The only surviving documentation I have from the 90s mentions Jeff Hurst, Ian Bithell, Jim Disley, Eddie King, Alan Whittle, and Peter Johnson (from Radcliffe), as contributing boxes. There may well have been more. By 1999, 20 new boxes had been installed, mostly on the mosslands, and these complemented about 20 still existing from the Leigh Ringing Group.

Over the years since, some of these older boxes have been replaced and others have been relocated, either due to non-use or development. Some were lost where barns fell down, or were redeveloped unknown to us. 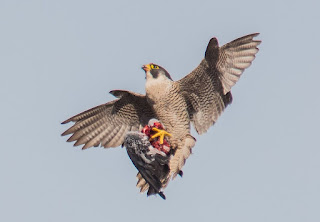 In 2006, the first nest trays for Peregrines were installed on buildings in Manchester City Centre, and as I was involved in this initiative, as County Recorder, and also because Barn Owl box installation was moving out of the Chat Moss area into the rest of Greater Manchester, it seemed sensible to re-name the Mosslands Barn Owl Conservation Group as Manchester Raptor Group to reflect this wider sphere of interest, and this took effect from 1st January 2011. This also enabled us to bring other local raptor studies under the aegis of the group. Important studies of Long-eared Owl, Kestrel, Little Owl and Tawny Owl were ongoing elsewhere in the county and I was aware of these through my work as County Recorder 1992-2011. Since 1999, Peter and Norma Johnson have monitored 690 Tawny Owl chicks, 487 Kestrel chicks and 75 Little Owl chicks fledging from their boxes in the Bury and Bolton areas, whilst Bob Kenworthy monitors a population of Long-eared Owls in the east of the county.

It was also decided to affiliate to the Northern England Raptor Forum (NERF) and our breeding results are published in its Annual Review in November each year at the always-oversubscribed conference. Older copies of this can be seen on the website www.raptorforum.co.uk 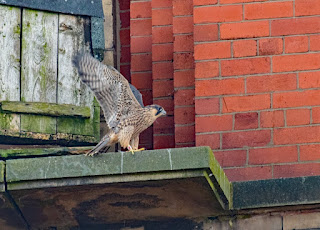 I was able to devote much more time to Manchester Raptor Group when I ceased to be County Recorder in June 2011. In 2016, a group of Barn Owl enthusiasts in the south Manchester area, led by Jamie Dunning and Chris Sutton, formed a sub-group of the Manchester Raptor Group and tackled areas in the county that we had been unable to visit, through lack of time and manpower. These included Carrington Moss, Dunham and the Mersey Valley. They have erected many Barn Owl boxes in those areas and have also provided boxes for Kestrels, Tawny and Little Owls. Similarly, in the Bury, north Bolton, Rossendale and Rochdale areas Rob Archer, helped by Craig Bell and Brian Kirkwood, have built and put up many boxes and established a breeding population of Barn Owls at altitudes which had previously been dismissed as unsuitable for them.

Following the success of the Peregrine nest trays in Manchester, which itself brought a number of enthusiasts into the group, trays were erected at Rochdale and Bolton Town Halls and Oldham Civic Centre. Pairs were discovered on mills, and in quarries, where they have had mixed success. The fledging rate at safe urban sites is high, and has been echoed throughout the country, providing a reservoir of non-territorial birds which can quickly move into areas where birds are shot. Indeed, the appearance of immature birds at a nest site in the breeding season is usually an indication of persecution. 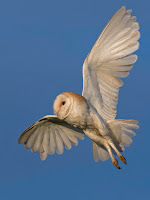 The Manchester Raptor Group therefore specialises in Barn Owls and Peregrines throughout Greater Manchester and extends, since 2016, into those 10km squares in which the county boundary falls. Currently we have erected 114 Barn Owl boxes and monitor 31 others provided by landowners or other bodies; 5 quarries, and 6 buildings which are disused, dangerous or in ruins which host Barn Owls. However, the west of the county still holds the majority of the sites, with 90 falling into the Leigh Ornithological Society's recording area. 2017 saw a record number of 120 Barn Owl chicks fledging, and in the same year we monitored 14 Peregrine sites which fledged 26 young. Most of our Barn Owl and Peregrine chicks are ringed – we have two ringers and hope that another can join us in 2019.