GUSTY FOR THE GUTSY


A difficult 'Decide on the Day' event for our December fieldtrip. The group met as usual on Doctors Nook and the weather would eventually make our final decision. The western side of the country would be ruled out as the forecast was very poor, so it was decided to head over the border, eastward bound, to the destination of St Aidan's RSPB. 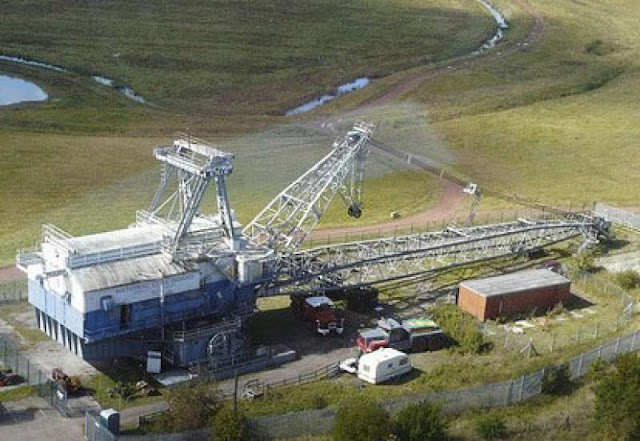 On arrival, our group of gutsy birders gathered, only to be confronted by a rather nasty looking incoming heavy shower. As we collected our belongings, the first real spot of the day. A Green Woodpecker flew across the car park only just above our heads.

At St. Aidan's there is a huge old Walking Dragline Excavator, called the Bucyrus Erie BE 1150, but more affectionately known as 'Oddball'. Little Owls roost and nest nearby but we had no luck in finding them.  However the Kestrels that nest in the machinery were seen many times throughout the day.

We all headed for the comfort of the reception to take shelter from the incoming weather. Here we would gather some information for the site, have a coffee, and wait some 20 minutes for the heavy shower to pass over.

Eventually we headed out onto the reserve. From the top by the coal dragline the whole site is visible, and for those whom have never been, I can only describe it as an caldera of wetland. The site has a great population of Kestrels. We watched as the birds hovered on the wind hawking the grassy embankment before taking a well earned rest on the massive excavator. Further on, good numbers Curlew and Wigeon, gave great views.

Now in the depth of this once opencast mine, we followed a pair of Stonechat and a number of Meadow Pipit flitted across the path. Above us, just above the steep hillside a single Buzzard was harassed by two Carrion Crows, then the Crow decided to have a pop at one of the Kestrel. Further along the path a Red Kite soared above the hillside and yet again the Crow took a dislike.

We headed towards the causeway, via a path that dissects the whole site. Huge numbers of Moorhen to our left on the boggy wetland. The lagoons to our right Pochards, Goldeneye, Shovelers, Teal, Gadwalls, with a handful of Tufted Ducks, and a single Snipe over. Also a Cetti's Warbler burst into that unmistakable song undercover of the reedbed, accompanied by the squealing of a Water Rail.

On reaching the causeway, a Peregrine Falcon sped its way across the water, lifting hundreds of panicked Lapwing into the air. Also Herring Gulls, Lesser Black-backed Gulls, great numbers of Black-headed Gulls and what can be only described as a cover of Coot as far as the eye could see.

Crossing the Causeway we would follow the Aire and Calder Navigation, a brief stop by the weir on the River Aire would only pick up some of our more common birds; Grey Heron, Blue and Great Tit.

Eventually we arrive at Astley Lake, here a single Linnet amongst the couple of hundred Lapwing and Black Headed Gull. A couple of Common Gull and as we wound our way back for some lunch, a Volery of Long-tailed Tits meandered its way by A charm of Goldfinch also passed as we retraced our steps back to the comfort and warmth of the RSPB Reception, anticipating a welcome brew and lunch.

After a spot of lunch, some information had come in of a large flock of Geese on the Owl Wood side of the reserve. So to kill some time before 3pm we set off. This turned out to be a rather muddy trek, circumnavigating a hill of arable set aside. Alas, not a goose in sight. But on reaching the furthest point, good numbers of Redwing a handful of Fieldfare and a single female Yellowhammer.

It was now Owl 'o'clock, about 3.30pm. Short-eared Owls to be precise. We made our way back down into the reserve. The coal dredge high above us and adjacent to the grassy slopes were we hoped to see our goal. Four Owls had been seen the night before, but as the light faded and the wind blew, it was not to be.

Eventually we called it a day. We had been lucky with the weather really. But on the other hand not so lucky Owl wise I'm afraid. All in all 51 species recorded, not a bad return.

Thank you to all for your company as always . Wishing all our members a Merry Christmas and a Prosperous New Year.

Whipping the Flash into Shape 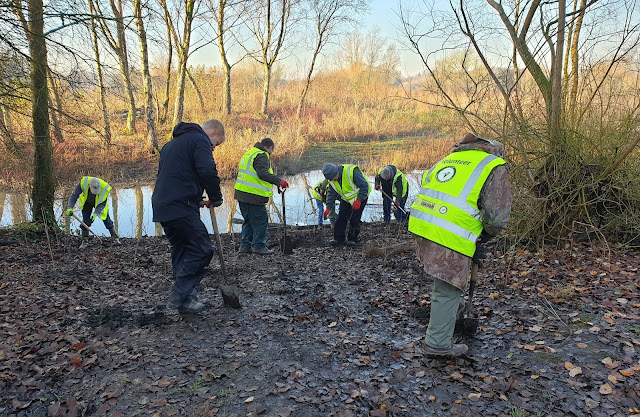 Led by L.O.S. Chairman David Shallcross and Wigan Biodiversity Officer Kieran Sayer, the whips were soon dug in to fill in the gap left where the previous trees had been felled to give access for the heavy machinery to enter the area for groundworks.

The group also did some litter picking and work on installing a new wooden floor in the storage container we have recently acquired. 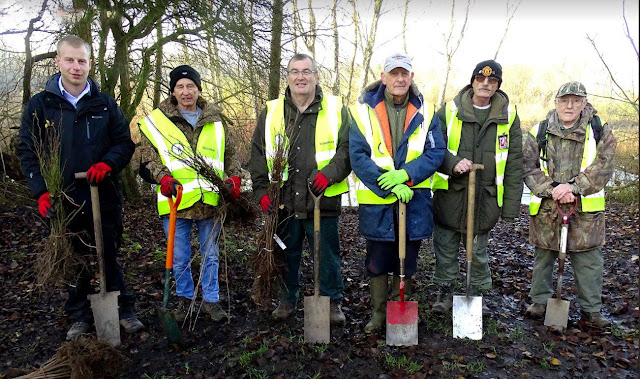