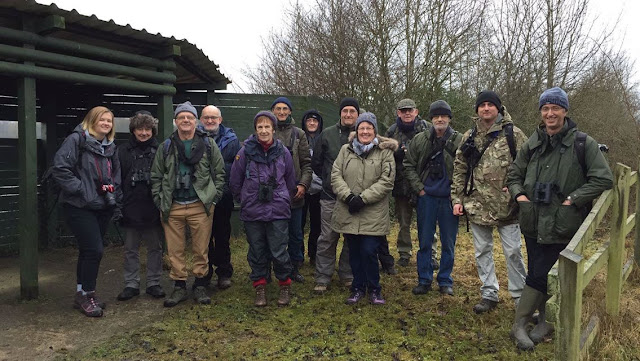 Today's trip to Marbury Country Park with the (almost!) impeccable navigation of Alan Wilcox took in Budworth Mere, a lot of fine and varied woodland, some meadow and scrubland, Neumann's Flash and Haydn's Pool.

Those of us who hadn't been before were pretty impressed by the variety of habitat, though the murk and mist didn't help the viewing over the various pools. I recorded a total of 39 species (Geoff Hurst might have had more) including impressive numbers of Great Crested Grebe on the Mere, some of which were displaying already, Wigeon, Little Egret and a Common Gull on Neumann's, and woodland species including Goldcrest, Treecreeper and Great Spotted Woodpecker.

A Raven called from somewhere in the canopy, and was glimpsed by some of us. The Lesser Spotted Woodpecker and Bittern did NOT show themselves, but the photo of Budworth Mere will explain the problem of Bittern-spotting today!

A really good trip in great company as ever, and thanks to everybody who came along.
2 comments: