Gordon Yates Bows Out After 43 Years 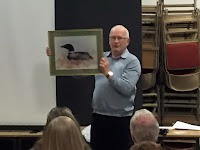 After 43 annual visits to the Leigh Ornithological Society, it looks like Gordon Yates is finally putting away his cine projector and incredible collection of birding and nature films for the last time.

Tonight we had another superb presentation by Gordon in the Derby Room, the spiritual home of the L.O.S., with a talk entitled 'In Search of Himbrini' (The Great Northern Diver).

Another L.O.S. legend, Dave Wilson, gave a sometimes humorous and informative vote of thanks, and Chairman David Shallcross presented Gordon with a bottle of his favourite Laphroaig Whisky from Islay along with honorary membership of the L.O.S. in recognition of the all the pleasure and enjoyment he has given to the Society over the years. All together a memorable evening which was attended by around fifty members and friends. 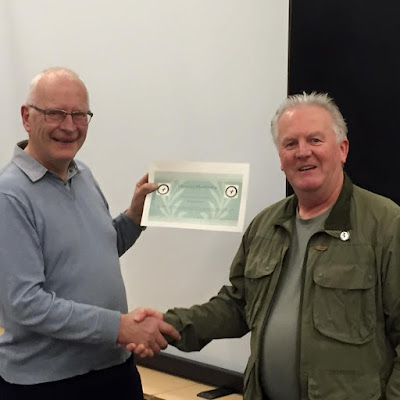 Here are quotes off Facebook by some of those who attended:


I was on Gordon's shoulder all the way through tonight - literally and figuratively. I empathised his (and any) photographers doubts and fears ... will the bird be at this spot next year; if it is, am I too close to this bird now; is the weather going to change; am I going to be at the right distance when and if the sun finally shines. All us 'togs know, as Dave Wilson so aptly pointed out, we don't need long to achieve that near perfect shot - just a few seconds clicking with a still camera, as little as two minutes with a cine or video camera and it will be job done - in the bag!

Leading up to those few clicks or minutes can be a year - several years of waiting - hours of walking, searching, moving hides by a few feet for days on end. There are times when you would rather whip yourself with nettles than carry on with your quest, but that quest isn't going away - it calls to your subconscious all the time - you have to answer and go.

And for 40 odd years that we know of, Gordon has answered and responded and the end result of all the work, sweat, tears, joy, despair, every shade of emotion, finally devolves down into the finished film. Gordon you have my admiration,  every step of the way - thank-you. 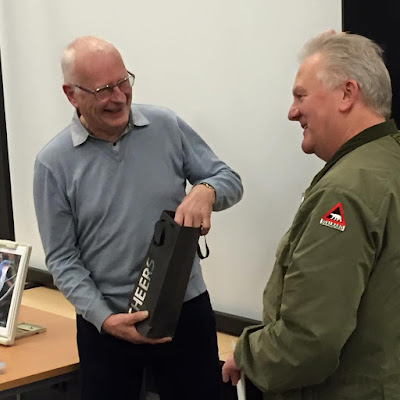 
A very enjoyable evening, well attended and received by all I'm sure. Gordon has amazed us with his presentations over 40 years, and his enthusiasm and knowledge of his subjects is inspiring. He has given us not only entertainment but education on a wide range of fauna and flora. We have seen everything from our own local wildlife to moorland, heathland, coastal and estuarine habitats and the creatures that live there.

We have been to every part of Great Britain and seen its wonders. We have been to places abroad and been fascinated by it all - tonight it was Iceland and the many trips, days and hours spent in pursuit of Gavia immer, the Great Northern Diver.  You have given us at Leigh Ornithological Society many brilliant evenings Gordon, who remembers "Symonds Yat to Muckle Flugga"? Entertainment, education and inspiration has been the theme running through your shows all these years.

You thought they were just film shows, little did you know the effect your skill as a film maker and wildlife presenter had on many of your audience, me included. Dave Wilson gave a fitting vote of thanks tonight. which has to be the longest of all time, a 16 minute run down of the evening, the many presentations and the deep admiration we all hold for you as a friend of the Society. Many thanks indeed. 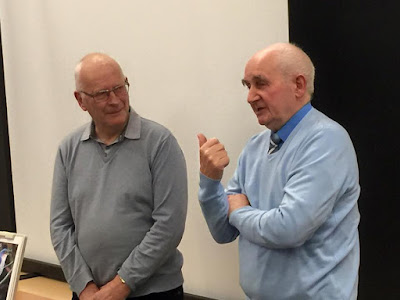 
Fantastic and educational presentation. (My 10 year old son) Joshua has already told his mum, he is off to Iceland. He has already pencilled next month on the calendar....

So it could be the end of an era, but remember Frank Sinatra?