Our last series of primary school presentations before Easter have been at St. Richard's R.C. Primary School in Atherton. We visited the school twice to give our 'new style' presentations which split the feeding of birds from the their identification.

Our first session started with a Y4 class and later a Y5 class with George introducing Leigh Ornithological Society and explaining what the Society is and does and why we call it the L.O.S. (most of us can't even say Ornithological never mind spell it!). George then went on to tell the children why we're visiting schools, especially at this time of year, with details of how we call all help the birds in our gardens, parks and schools.

The presentation then began a discussion about which birds we are not likely to see locally such as Penguins, Ostriches, Hummingbirds and Golden Eagles with reasons as to why not. This was followed with a short quiz with photographs on some of the birds we should be able to see quite easily both locally and in our own gardens. There was a very good response from the children who were keen to answers questions and who also had many of their own.

Then it was time for the main activity which Brian explained and demonstrated very carefully and clearly to each of the classes.

The Y4 class made hanging seed feeders from a recycled plastic bottle by inserting two thin garden canes at right-angles for perches, poking holes around the middle of the bottle through which the birds can eat the seed and then threading some garden wire through the top to hang it up.

The Y5 class made some fatball feeders by cutting the bottom off a plastic bottle, making a hole in the side for the birds to eat the fatball and threading some garden wire through the top to hang it up.

The fatball was then placed inside with the netting removed so that the birds don't get trapped. This simple feeder is actually one of the quickest and most effective of all the ones we make.

After this Martyndescribed and demonstrated some of the best types of bird food to use in and around the feeders at home and in school. This included sunflower hearts, black sunflower seeds, nyger seed, fatballs, peanuts and monkey nuts, mealworms as well as mixed seed.

A tub of each type of food was shown to the children who were very interested in the different sizes, shapes and colours of each.

This section was completed by briefly mentioning that some birds prefer to eat off the ground or bird tables, whereas others eat by hanging from tree branches. More is done on this in the next session.

The first session was completed by Martyn who gave some details about the L.O.S. Young Birders' Club and website as well as our next planned guided walk around Pennington Flash - a letter was given out for the children to take home to their parents.

Finally the pupils were asked to design a new logo for our Young Birders' Club and told that it was a competition with a bird-related prize for the winner. But perhaps more importantly, the winning design will be used on the LOSYBC website and any other documents we produce.

Our second visit to St. Richard's was focused on bird identification. The main activity was to build a rotating Bird ID Dial and then use it to identify some birds from photographs.

Brian clearly demonstrated how to make the Bird ID Dial and explained how it could be used. He was very keen to emphasise that the cutting out should be done ''carefully, accurately and meticulously!"

After the demonstration the children worked in pairs to cut out the dial's two cardboard discs and then fasten them together with a split pin fastener.

When they had finished, Martyn went to explain that some birds feed mainly on the ground and other mainly by hanging from branches, although they both may sometimes do the opposite when food is short.

After a brief outline of many ground feeding birds, he described two of them in detail, the Blackbird and Chaffinch, with large colour diagrams projected on the whiteboard and then finished off with the songs that each bird makes. Brian then did the same for two hanging feeder birds, the Blue Tit and Goldfinch. The class really enjoyed seeing the drawings and hearing the different sounds

This identification section was completed by doing two quizzes based on bird photographs. In the the first quiz the children had to use what they had just learnt and their ID dials to identify some common garden birds from full photographs, writing their answers on a sheet.

The second quiz was a little harder, because only parts of the birds were shown in the photographs. A few pupils even went on to do a third quiz which was much harder than the first two.

The children all worked very hard on these quizzes and many got all the answers correct, so well done to all of you!

Our final activity was to go outside and hang up some of the feeders which the children made last week. A pair of step ladders was borrowed from the caretaker as well as a window pole to pull down some branches of a nearby tree. 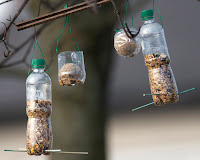 Risking life and limb, Martyn stood on the steps to hang up a group of four feeders outside the Y4 classroom so that it could be seen from their windows - the same was also done with the Y5 class. However, as it was quite cold and windy, it wasn't surprising that we didn't stay outside for very long!

It was a pleasure to visit St. Richard's because all the pupils and staff (Mrs King, Ms. Cunningham, Ms. McGhee and the Office Staff) were very welcoming and enthusiastic. We hope to go back again sometime to do a session on recording the birds we can see either on the feeders, or perhaps on a short fieldtrip somewhere.