Rare Warbler Turns Up In Leigh

A rare Blyth's Reed Warbler was found by Phil Rhodes at Hope Carr Nature Reserve / Sewage Works in Leigh last week (yes, birders really do get to some picturesque places don't they?).

I'm told that this is the first time ever that one has been seen in Greater Manchester and that less than 10 a year are seen in the UK as a whole.  I myself have been three times to find this bird and spent about nine hours of waiting with just a Chiffchaff, Wren and a few Linnets and  Pied Wagtails being seen.  The reason for the title is that the bird is a very active skulker in  the brambles and never appears out in the open for long.

The photo below shows the bird feeding on a spider's egg sacks and was taken by our chairman David Shallcross on one of its rare appearances. It was featured in this week's Rare Bird Alert weekly roundup. 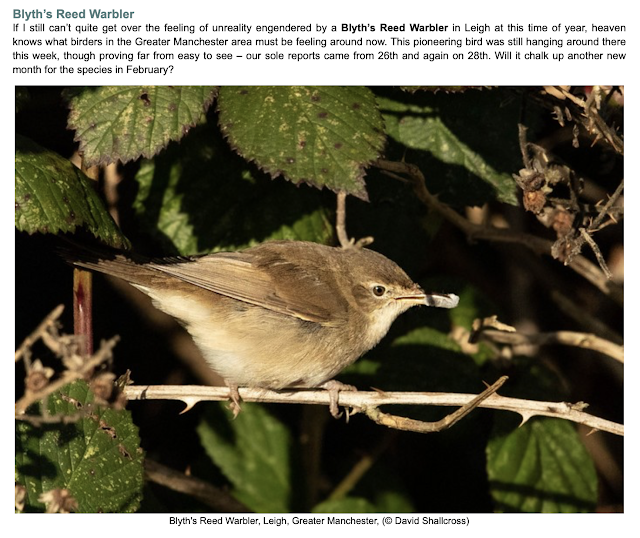 I am trying to get the original finder to write a brief report on how he found it, how it was first thought to be a Reed Warbler and how the story progressed to its final determination of being a Blyth's Reed Warbler - so watch this space.

UPDATE:
I've seen it now!  Photos and report on my own blog: www.gt-birding-scrapbook.blogspot.com

yes this little bird certainly can flit about, it's none stop with its feeding pattern and my picture is a very lucky shot, i have to give credit to my camera and lens for their speed of capture and focus.