Henry McGhie, who some L.O.S. members met on a recent trip to Manchester Museum, has written a new book about the museum's main bird collector entitled:

Henry wrote this post about it on the Manchester Birding Forum: 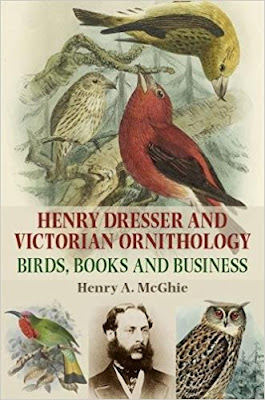 I’ve written a book about Manchester Museum’s main bird collector (Henry Dresser), one of the most important ornithologists of the late 19th and early 20th centuries , and used his life to explore transformations in scientific society and the whole collecting endeavour, from wealthy people in the west to a vast variety of lighthouse keepers, travellers, speculators and explorers farther afield. I saw the first hard copy yesterday and it looks really nice, if I say so myself.

The book will be launched in the beautiful John Rylands Historic Reading Room at 6pm on 30th November, with a very short talk from me, and no need to book in advance. I’d be very grateful if you could forward this date to your contacts, as it would be great to see as many people there as possible; I’ll be signing copies for anyone who wants one (don’t feel obliged).

The book would make a nice Christmas present for anyone interested in natural history, beautiful 19th century illustrated books, history, travel and exploration, or who is really fond of museums (especially Manchester Museum).

Of course, everyone is very welcome to come along. Some of you will know a lot of the story already, as I’ve talked more or less endlessly about it for years, but it was a lot of fun to write.

I hope you can come along.
Best wishes, Henry