At this exact time, fifty years ago tomorrow, Frank Horrocks and six lads in their late twenties gathered in the Britannia Inn on St. Helens Road in Leigh to talk about forming a society which would promote the case for the conservation of Pennington Flash. This was not the first attempt at forming a local conservation group, for in 1938 Tom Edmondson, although still a pupil at Leigh Boys’ Grammar School, had brought together three friends with an interest in birdwatching to consider creating a naturalists’ recording group. This ambitious move would hopefully evolve into a group with wider objectives, most notably “preserving and protecting” the countryside, but the beginning of the Second World War brought the venture to a disappointing end, and later attempts, in 1948 and 1958, to follow a similar course towards the conservation of Pennington Flash came to nothing! 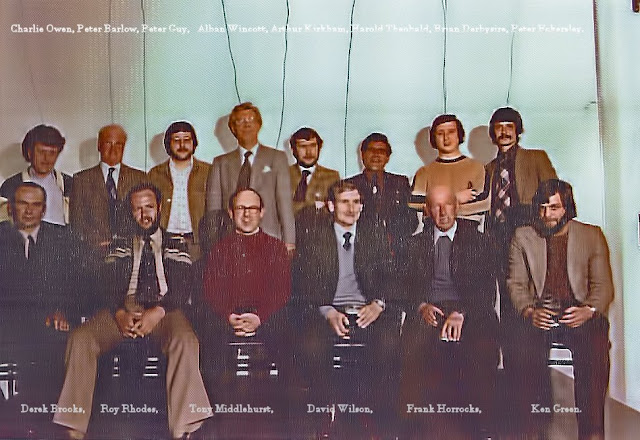 And so to the early Spring meeting in the Britannia Inn! As I recall, there was no proven specific threat to the flash at that time, but an uneasy feeling that the future was unpredictable and that if we could achieve some form of protective status for the flash it would counter any unwanted “development” and prevent the adverse effects of power-boating and shooting on what the short-lived 1958 initiative had advocated - “to create an area of undisturbed natural beauty”. In those distant days, the flash was not watched on most winter days and sightings went unrecorded! The seven friends who came together were all in full-time employment, but some still managed to make brief visits.
In the preceding 1970-71 winter, typical features of the flash were the wintering flocks of hundreds of predominantly drake Pochard, large gatherings of Common Snipe and occasional visits by Short-eared Owls to the north bank grasslands. My diary informs me that in the days following the Britannia meeting 5 Garganey arrived, 12 Wigeon passed through and, unexpectedly, Ruff and Red-necked Grebe made brief visits in the last few days. By the end of the moth, Skylark and Meadow Pipit songs dominated the north bank choruses and Spring was well under way.
The Britannia meeting lasted for over an hour! There had been some worries about what “the proposed development of Pennington Flash”, presumably by Leigh Corporation and Lancashire County Council, would entail, though what the exact details of the “development” were eludes my memory! What is clear, and is documented in the very first Society minutes book, is that Charlie Owen suggested that our group should bear the title “Leigh Ornithological Society”; there would be an annual Leigh Bird Report; and I was to write to  Leigh Corporation and Lancashire County Council expressing our concerns about plans for the flash.
At the second get-together, Charlie was appointed Treasurer and I was appointed Secretary; the initial subscription was to be 5/-; Roy Rhodes was to design and supply headed note paper! We were on our way, uncertain and cautious of how we would proceed, but, for four of us, there was a compulsive determination to give our all to pursue rhe mission to help conserve the varied flash habitats. We were also to widen our horizons by going public and adding meetings and publications to our aims towards involving like-minded supporters in what would be a service to the general public and wildlife alike! Fifteen members contributed towards the 1971 Report, 24 to the 1973 Report and double that by 1975.
The Derby Room in Leigh Library became almost a spiritual home. Attendances at Friday evening meetings soon exceeded 100 and twice reached 132; membership rocketed throughout the Leigh area; and individual Committee members worked tirelessly towards safeguarding important local sites - the late Raymond Yates at Low Hall Park; Tony Middlehurst at  the Wigan Flashes; the late Alban Wincott at Doffcocker and Rumworth; Ken Green and Brian Derbyshire at sites in Chorley ; Peter Barlow at Risley Moss; and Roy Rhodes at Astley Moss and Hope Carr.
And so to the present! The indefatigable David Shallcross and Paul Richardson are committed to promoting the conservation cause throughout the area; Joan Disley and Eddie King continue their dedication to producing excellent publications; and, over the years, members too numerous to mention have enhanced the Society’s reputation in the fields of education, site  visits and, perhaps, most of all , in extending the hands of companionship and friendship to old and young from many walks of life. In conclusion, an opportune meeting two days ago dispelled some of my worries about what has been happening at Pennington Flash, and the next half century is likely to bring long-awaited benefits for all - with a state-of-the art visitor and information centre, adequate on-site staffing and the prospect of becoming an integral part of the proposed National Nature  Reserve! In the fulfilment of this vision, I trust that present Society members will be involved in deciding what should happen - as informed participants in a grand vision rather than passive onlookers at what others may deem to be appropriate! What would Tom Edmondson, Frank Horrocks and many other dear departed friends have thought of these forthcoming goings-on?
Hopefully, I and many of my contemporaries, will be able witness the long-term benefits of this welcome initiative, grateful that the Society’s original intentions and the commitment of countless members has been rewarded. Covid restrictions prevent any form of a celebratory Britannia reunion on our anniversary date, but I am fortunate to live close to the flash and tomorrow, at half-past-seven, I intend to spend a short time by Pennington Brook and recall the events of fifty years ago. The bypass now blocks my view of the flash, but I’ll look towards Byron Hall and think of a young Tom Edmondson making his way there to meet his boyhood friend, John; I’ll allow my memory to transport me to the north bank and join Frank Horrocks, lighting his pipe, sheltered from the wind behind a cinder bank, and enjoying a conversation about what to look back on, what to look forward to, and the musical pleasures offered to us both by Beethoven, Schubert and Sibelius!
And, certainly, my mind’s eye will take me through the wooded brook bank to the towering Pennington church and, just beyond it, the Britannia Inn, the cradle of some young men’s aspirations half-a-century ago. I’m pleased that I was part of the movement to conserve a special place - but even more pleased that there are so many present Society members determined to continue working towards guarding and enhancing a vital part of our cherished wild heritage!
Dave Wilson - Founder Member of the L.O.S.

Proud to have been associated with LOS, cherished memories of Frank Horrocks et al.
Peter Eckersley

A fine and memorable piece Dave

It must have been hard work to keep things going in the early years; it's never easy to get a new organisation running as you want it to.
Well done to you and thanks to all past and present organisers, those who read boring planning documents or attend meetings with the council. You're all brilliant.
Keep up the good work and keep on birding.