Michael Morris - The Sad Tale of a Local Pioneer Naturalist 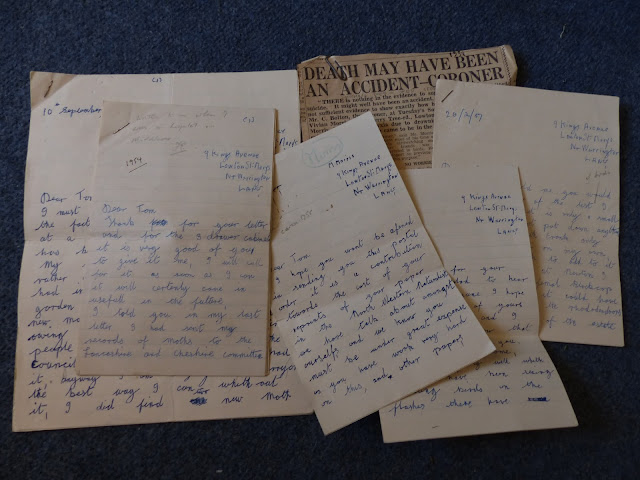 Most, if not all, readers will be aware of the contributions made to the success of this Society and local ornithology in general by Frank Horrocks and Tom Edmondson. A very few members knew them personally; to others, the names of the hides at Pennington Flash will serve as reminders of their great affection for the flash; and lengthy obituaries in Newsletters will inform recent members of their contributions in several ways.

What is less known are the names and activities of a tiny handful of their contemporaries, and the only one I have any brief details about is a young Lowton naturalist, Michael Morris. My knowledge of Michael is based upon occasional conversations with Frank and Tom, both of whom regarded him as a kind and gentle young man who was in his element exploring the countryside and discovering new sites and their plants and animals.

The tale which will unfold by reading extracts from his letters to Tom are from a bygone age, but speak volumes for the dedication and enthusiasm of a few like-minded men who, individually and collectively, deserve the highest recognition from all the nature-lovers and conservationists in the Leigh Ornithological Society for their infectious love and respect for our much-loved natural surroundings.

The extracts from five of Michael's letters to Tom and one from Frank to Tom are followed by a brief newspaper report and preceded by a short paragraph from a letter sent to me (David Wilson) by Tom Edmondson shortly before Christmas, 1986.

I have retrieved from my attic the few letters from Michael Morris that I have kept – five from 1953 to 1957. You may copy them but please do not publish any of the personal details during my lifetime. As you will see, Michael valued my friendship and such help and encouragement as I could give him. I treasure the memory of a remarkably nice and affectionate man.”

I must apologize for not writing before. The fact is things have been rather at a standstill lately and there has not been much to write about. My mothing activities have had rather a blow. The light which I had in my bedroom window or my garden, and by which I caught many new moths, I now am unable to use owing to the fact that certain people have complained to the Council about it, so I have had it. Anyway,I am trying to carry on the best way I can without it and I did find two new moths before I lost my garden light – the Olive and Oak Hook-tip..........

I am at present sugaring in Borsdane Wood, Hindley, but I haven't found any new moths yet........

Last Saturday, Frank and I went to Ainsdale. I was delighted with the plant life on the sandhills – Field Restharrow, Sea Holly, Sea Kale and many more........

Next year I hope to get a light trap. I could not afford one this year. I would like to thank you for all you have done to help me.

Thank you for your letter and the three-drawer cabinet. It is very good of you to give it to me. I will call for it as soon as I can.

I told you in my last letter that I had sent my records of moths to the Lancashire and Cheshire Fauna Committee. Last week I received a reply from Mr.M.W.Michaelis, the reorder. In it he said that I had worked very hard in my district and my list covered nearly all the common species likely to be found in my own area........

I cannot get any more new species without the use of a light trap and, as it is not possible to use one at my home, I might sell my furniture and try to get two rooms in a house with a large garden so that I can use one, but of course it is a big step to give one's home up, and I shall probably be misunderstood wherever I go.........

I hope you won't be offended in me sending you this postal order. It is a contribution towards the cost of your reprints of your paper in the North Western Naturalist........

We know that you must be under great expense as you have worked very hard on this and other papers and it contains some of my records. This is the best I can do to help.

…..... Things are fairly well with me and I have been seeing interesting birds on the flashes. There have been Pintail at Astley and two Scaup ducks and an immature drake at Pennington, as Raymond Yates will have told you about, and yesterday there was a lovely drake Garganey at Astley.......

The only migrants we have seen up to press are Wheatears and we have noted a movement of Bramblings, seeing them in places where we have not seen them before. On 25th March, I noted a flock at Lilford Park, Leigh, and Raymond saw some at Dean Dam. There were also some at Worsley Woods on Friday – three cocks and two females........

I am finding it increasingly difficult to find new moths, but I keep on trying now and again. After a very cold February the weather turned fairly mild and there was a good emergence of the Dotted Border.........

Frank has told me you would like a copy of the list I sent to Oakes. It is only a small one as I have not put down anything I have seen with Frank, only things I have seen on my own........

[ Following details of probable Blackcap nesting at Newton; duck numbers at Pennington; Goldfinches, Bullfinches and Long-tailed Tits at Risley; and Coots at Astley, the final paragraph in the last surviving correspondence ended:-]

Anyway, if there is anything else you would like to know I will help you if I can, but the most important thing is how are you. 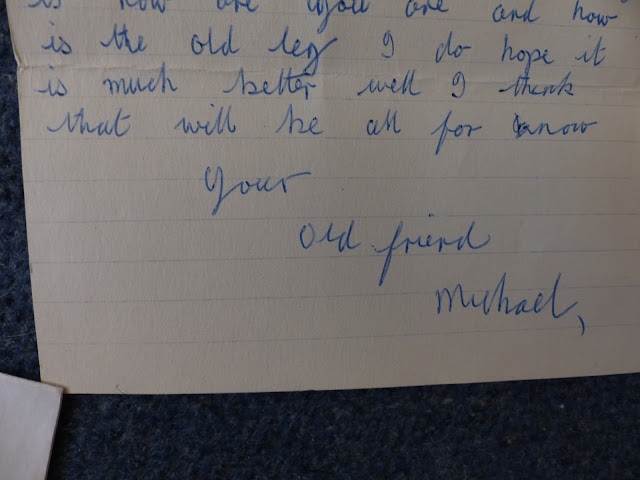 A man who lives close to here came on Friday evening with the terrible news that Michael had been found drowned on the beach at Southport. Perhaps you have read of it in the newspapers.

He called here on Tuesday evening having just bought a new wireless, and being on holiday he mentioned that he was going to Southport the following day, when the tragedy must have occurred. It has been an awful shock to us all.

The only other information I have is that the inquest is on Tuesday. What actually happened I don't think we will ever know, but probably he was trapped by the tide.


Extracts from Leigh Journal report of the inquest

Michael Morris's body was found on Southport foreshore last Thursday about a mile out.

Michael's brother, Llewellyn Pryce Morris of Bolton, said that although in good health all his life he was unfit for Army service in 1941-42 because of heart trouble. His eyesight was poor and he wore spectacles.

“He couldn't swim to my knowledge, although he was careful when he went near water,” said Mr.Morris. “He spent most of his time at week-ends birdwatching and with other friends was keenly interested in birds. He visited Southport on previous occasions for this purpose.”

In reply to the Coroner, Mr.Morris said his brother was quite cheerful and had no worries as far as he knew.

P.C. Alan Livesey said that last Thursday morning he was taken to the body of Michael a mile out. It was in a kneeling position, fully clothed except for shoes and stockings, and the trousers were rolled up to the knees. A haversack contained a light meal and a flask of tea. In the clothing was a bus ticket and a cheap day return rail ticket from Wigan to Southport.

This article has been compiled and written by David Wilson

We should always remember the early pioneers, as without them we wouldn't know so much about the nature and wildlife around us.

What a sad end to the young mans life, he lived in a time when people looked upon bird/wildlife enthusiasts has strange folk. He probably felt persecuted at some stage especially when he had to stop using his moth light. It seems strange to be found kneeling....i hope this was a tragic accident and nothing more. Cheers Dave for this thoughtful account, albeit a snap shot of Michael's life and character.

What an interesting story - thanks Dave for sharing it with us. How sad that Michael had to stop using his moth light. It's good to know more about these earlier conservationists. Angela