Flycatchers and Tales of the Unexpected - Part 2 by Dave Wilson

An interest in the history of the American West brought us to the Oregon Trail Centre on a fine early June morning in 2011, and, within a short space of time, a third thread entered this tale of the unexpected – what might be called a series of isolated incidents where one led to another and ended in an astonishing encounter.

Before entering the Centre, which was perched on a high point among fairly inhospitable sagebrush habitat, I happened to hear a lovely sustained warbling song coming from a slope behind the centre. This was being delivered by a Sage Thrasher, a fairly common summer visitor to arid zones in this part of North America, vaguely similar (at distance) and about the same size as our Song Thrush and in this instance, one which tolerated a close approach for a snapshot. As soon as I'd taken the picture, I noticed, about fifty yards down a rocky slope, a small grey bird flitting about by an ancient, barbed-wire fence.

Again I took a picture, but this time unknowing of its species, or even that it was a flycatcher. Later that day, I looked closely at pictures of all the very similar-looking 'Empidonax' species in my sole field guide and deduced that this bird was a Gray Flycatcher, similar to the Dungeness Acadian Flycatcher, but with a few barely discernible differences, including bill length and colour, an occasional olive tinge on the upperparts and, uniquely, the habit of dipping its tail slowly when perched. Its preferred breeding haunts are the dry habitats if the interior of the states of the West, identical to the sagebrush slope where we were. This incident was certainly unexpected, but there was something more to come.

The brief encounter led to the concluding surprise, when Carole, a keen knitter, noticed, during the climb back through prickly vegetation, what appeared to be a large bundle of discarded wool of various shades of grey, a very curious place for litter-dumping! A closer look revealed that the bundle was, in fact, a Great Horned Owl youngster which had probably just embarked upon its first flight; minutes later, in the large entrance hall to the Oregon Trail Centre, we came across one of the adults close to, I presumed, a concealed nest site. 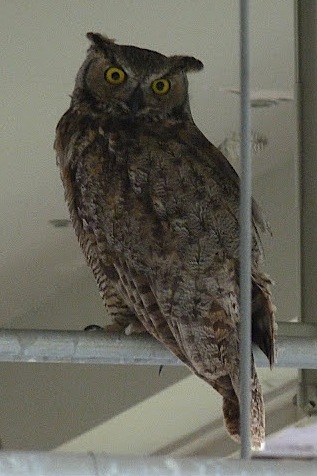 What an interesting, unforgettable sequence of events – the delightful strains from the Sage Thrasher; the tiny Gray Flycatcher feeding among the sagebrush; and one young and one adult Great Horned Owl enabling me to include the experience among my memories of joyful unpredictability when birdwatching. And, to conclude, surely all three of us – Meg, Martin and myself – will hope that every reader will, at some time in the future, be able to relate to us all his or her own “tale of the unexpected”.

WEll I'm waiting for more tales of the unexpected from you Mr Wilson - cos I know there are many more that could be told! Thoroughly enjoyed that, just a shame I know have the theme music from 'Tales of the Unexpected' running through my mind like a worm ... or as my dad used to call it 'Tales of the Unexpurgated'.... !!