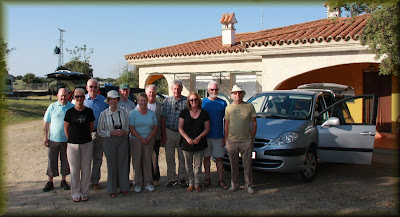 Day One: Arriving in Madrid on 3rd May 2007 with the knowledge that weather conditions had not been too good over the last month, we were not surprised to step off the plane and be greeted by rain.

First job was to find the hire car area; a fine vehicle had been arranged that had plenty of room for four people, scopes, and all that goes with a birding trip. Within an hour we were off to find our billet which was somewhere in the hinterland of Extremadura, approximately two and a half hours away to the west.

A few miles down the motorway we hit a storm like nothing you’ve seen before, visibility was so bad that many drivers stopped on the hard shoulder.  That was the last rain we had.  Eventually we arrived at “Camping Monfrague”, it was dry by now. We collected the keys to our bungalows and proceeded to unpack and wind down; we were greeted by our patio roof space lodgers (House Sparrows and Spotless Starlings) and Azure-winged Magpies, then a beer or two in the bar, our evening meal in the adequate restaurant and bed after a long day.

Species for the day 24

Day Two: A day in the Parque Natural de Monfrague and a general scout around to get the feel of it all, there are many interesting tracks to follow and some good vantage points on the roads to scan and view scrub birds while keeping an eye out for raptors. En-route we arrived at Pena Falcon which is a massive pinnacle of a rock skirted by water on three sides. It is home to a large colony of roosting and nesting Griffon (Anne counted c80) and Egyptian Vultures, Peregrine Falcon and a lone Black Stork. The stork was nesting in a cave and we could clearly see the bird brooding a restless chick. Other species noted were Red-rumped Swallows, Blue Rock thrush, Redstart, Sardinian warbler and Red-legged Partridge.

Species for the day 42

Day Three: (temperature rising) The Belen Plains or steppes, open country virtually treeless and flat - the likeliest place to find Bustards, we had been given some idea of where to find the birds by a couple of birders the previous day. On our way we stopped at a place called Portilla del Tietar, known for Eagle Owl and Spanish Imperial Eagle; we had good views of the former (with a chick) but the latter was to elude us throughout our stay in Extremadura.

Onward to the steppes and, after some time searching the vast areas with telescopes, we did see a mixed group of twelve Great Bustards and in three other locations single Little Bustards one female and two males. There were numerous sightings of Corn Bunting, Crested and Calandra larks and Zitting sisticola. Our return journey was to take in the bullring at Trujillo for Lesser Kestrels which nest under the roof tiles, Spanish Sparrow and Spotless Starling were also in residence.

Species for the day 56

Day Four: A trip to the hills around Placencia and the Valle de Jerte. Short-toed Treecreeper (a new bird for us all), Grey Wagtail, Black-Shouldered Kite and Raven were about, as were the breath taking Golden Orioles which frequented the cherry orchards. Storks, Griffons, Buzzards, Kites and Short-toed Eagles floated silently by. Crag Martins, Siskin, Serin, Rock and Ortolan Buntings were also noted.

Species for the day 48

Day Five: (hot) Santa Marta de Magasca, a location set in dehesa type habitat further south in the region. We encountered Great Spotted Cuckoo, Black-eared and Northern Wheatears, Woodchat and Southern Grey Shrikes. Then a change of scene to enormous stretches of barley fields over which we observed up to five Montagu’s Harriers (males, females and juveniles) and a darker bird, possibly an interloper from Portugal were there is a breeding population of melanistic birds. Other superb ticks were Rollers, Bee-eaters and Black-bellied Sand Grouse.

Species for the day 60

Day Six: (very hot) Sierra De Gredos, an hour’s drive north-east from our base. First we stopped at Puente del Dugue, a camp site set in woodland, which offered the chance to wander up a stream and watch a Dipper carrying food to the nest, and Grey Wagtails bobbing by the water’s edge. A Pied Flycatcher appeared and Black redstarts were present, Green Woodpecker, Goldcrest and Treecreeper could be heard.

Around the corner open damp fields attracted Yellow Wagtails and, on the roadside slopes, Stonechats and Redstarts were on territory. Onward and upward high in the mountains (some still bearing snow on the tops) we had a fantastic meeting with two Ibex on the roadside, fairly confiding, as they licked the road for salts (?), and further on a group of eight on the crags. Rock Bunting, Black Redstart, and Ortolan Bunting were easily seen, Red Kite and Honey Buzzard were occasionally encountered. Then we moved on to the gardens of Hotel Parados de Gredos, said to be worth a visit, and we saw Crested Tit, Nuthatch and a Honey Buzzard overhead. We had some amazing views as we snaked our way down and back to our base. A terrifically refreshing day in the cool and tranquillity of this wild and remote area.

Species for the day 58

Day Seven: Another long drive, this time south through Trujillo and on to Zorita and Madrigalejo to see what was on offer in a different habitat (paddy fields), with a quick stop at Embalse de Sierra Brava for Gull-billed Tern and Great Crested Grebe. Eventually we arrived at the paddy fields which proved to be very disappointing! They were neglected and dry, but always there were highlights waiting, e.g. Nightingale, Bee-eater, Hoopoe. Not to be dismayed, we travelled on vaguely in the direction of home hoping for better things. It was nearing time for lunch when we spotted a group of birders on a track by the river the Rio Gargaligas - what a brilliant place!  Apart from very close views of a White Stork on the nest with its chick securely beneath, in the river bed and on its banks were Pied Flycatcher, Waxbills, Red Avadavat, Little Bittern, Night Heron, Gadwall, Mallard and Little Ringed Plover.  Kingfisher, Grey Heron, Cattle and Little Egrets were all silently fishing.

Species for the day 59

Day Eight: (even hotter) Sadly homeward bound, but we had to take a last look at Pena Falcon with its busy flight path of circling Griffon, Black, and Egyptian Vultures, Short-toed and Booted Eagles, Kites and hundreds of Hirundines. It was hard to break away but time was closing in on the inevitable silver bird that was awaiting us. Then on to Portilla del Tietar for a final look at the Eagle Owl, its chick and please, please, the Spanish Imperial Eagle. Ah well, better luck next time - we’ll have to go again!

Each day there were numerous sightings of White Stork, Black Kite, Corn Bunting, swifts, swallows and martins and all the various larks, doves and shrikes that abound, together with the almost constant sound of cuckoos.  This fantastic area with its beautiful countryside, amazing vistas, and deserted roads is well worth a second trip, every day was different. There is a wide variety of habitats, many of which went unexplored through lack of time, but are there waiting for us to return.

Total birds for the holiday was 120

Aside from the birdwatching, we found that the local people (despite not speaking or hardly understanding English) were all very friendly, helpful and honest.  The campsite we stayed on had a small shop selling fresh bread daily and other essentials, the usual shower blocks etc for campers, and a communal building containing a function room, large bar and restaurant.  On our first night, whilst having a pre-dinner drink in the bar, we were treated to an impromptu vocal performance by some mature ladies who appeared to have taken a shine to David (can’t think why).  We didn’t understand what they were singing, but had to assume that it was complimentary and thanked them as best we could.

Then there was the time when the car got stuck in a muddy patch along a track.  After trying the usual tricks of putting grass, twigs (even two bath towels) under the wheels without success, we were eventually towed out onto terra firma by a young man and his Land Rover.  He could speak no English but led us to understand that he worked on a campsite and was used to towing people. Despite our protests, he wouldn’t accept any payment for his trouble.  On another occasion, some of our possessions had been left unattended for several hours but, when we returned, nothing had been touched.

Special thanks to Tony for booking flights, cars and accommodation, Anne and Tony for working out the itinerary and Eddie for his rally driving skills.